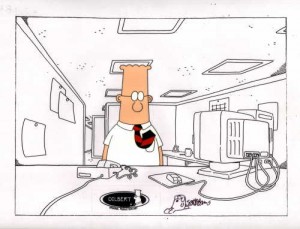 I’d like to begin this post by disclosing that on every standardized test I’ve taken, my reading comprehension score was very high. Having said that, I’m still struggling to understand the meaning of Scott Adams’ controversial blog post that caused an uproar amongst the feminists. To paraphrase this debacle, Adams wrote a post on his blog addressing the men’s rights movement saying:

“The reality is that women are treated differently by society for exactly the same reason that children and the mentally handicapped are treated differently. It’s just easier this way for everyone. You don’t argue with a four-year old about why he shouldn’t eat candy for dinner. You don’t punch a mentally handicapped guy even if he punches you first. And you don’t argue when a women tells you she’s only making 80 cents to your dollar. It’s the path of least resistance. You save your energy for more important battles.”

When attacked, Adams removed the original post with no explanation, which reeked of guilt. He later wrote a lengthy post entitled, I’m a What?, which was meant to defend himself and explain the misunderstanding. After combing through this follow-up post, I confess that I have no better understanding of his argument, or what he was originally trying to portray. Personally, if I was accused of sexism and misogyny, you better believe I’d cut to the chase.  In fact, I might just say, “I love women” and be done with it. But Scott Adams is different. So here’s what I’ve made of my limited understanding. His original piece was meant to poke fun at the men’s rights movement, which he labeled as a ‘bunch of pussies.” But which part of that original post was a joke? You can certainly oppose the movement on the basis of there being more important things to worry about, while simultaneously believing that women are treated more favorably than men. Furthermore, when he addressed the feminist blogs that attacked him, he said, “I was also labeled an asshole, which I have come to understand is a synonym for male.” This is probably not the best thing to say when trying to worm oneself out of a mess — guilty or not. So what’s the moral of this long, tedious story? Either standardized tests mean nothing, or Scott Adams needs to be more clear when attempting damage control.

7 thoughts on “Is Dilbert’s Scott Adams a Misogynist? — Maybe?”