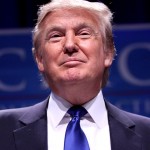 Did anyone actually think that Donald Trump was serious about running for President? The most surprising thing about this entire debacle is that news outlets actually took the time to report his antics. I take that back. The most surprising thing is that President Obama actually released his birth certificate, as per Trump’s recommendation. What’s next? Will Richard Simmons run for President and demand that Obama run around in little shorts?