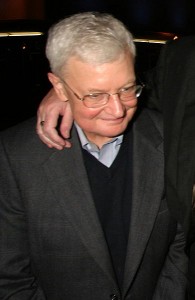 Roger Ebert has sparked a venomous conversation about his recent Ryan Dunn tweet, when Ebert said, “friends don’t let jackasses drink and drive.” As a result, Ebert apologized — or further explained himself. He said his tweet was “not intended as cruel” but rather, it was “intended as true.” I have mixed feelings about this. First, I’m not sure it’s necessary to state the obvious at a time when Ryan Dunn’s friends and family are grieving. But to quote The Superficial, “Instead of being behind the wheel of a Porsche, if Ryan Dunn had ran down the street randomly firing a gun . . . ” would you still call Ebert an insensitive prick? I’m not sure. This might be the best time for a public lesson — insensitive or not.