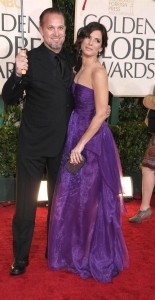 The opposite of love is apathy, not hate. So it only makes sense that Jesse James is still madly in love with Sandra Bullock, given that he consistently bashes her in every possible medium. His latest slam happened on American Chopper, where James said, “I became a big shot and married some Hollywood actress and didn’t talk to anybody anymore, so I feel bad. . . I feel obligated to reconnect with all these people and show ’em that I’m still the same fabricator motorcycle guy. I’m not what I became.” It’s amazing he was married to that “Hollywood actress” for years, and now he flippantly dismisses her. With all that animosity you’d think she was the one that cheated. Watch the video after the jump.