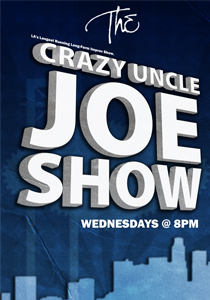 Not a day goes by where I don’t appreciate living in Los Angeles. My most recent appreciation is sparked by my night at The Groundlings to see The Crazy Uncle Joe Show, a long-form improv-comedy show that is based on suggestions from the crowd. Though every cast member of The Groundlings is astoundingly talented, Jim Rash stole the show tonight. If you don’t know Rash, aside from an Oscar winning resume, he’s the guy who made fun of Angelina Jolie’s ridiculous leg-pose at the Academy Awards by sticking out his own leg on stage. I didn’t realize at the time that his sharp decision to poke fun at Jolie isn’t surprising given his stint at The Groundlings, which involves a million sharp comedic choices in the span of an hour. It’s no wonder that Saturday Night Live has so many cast members from The Groundlings. These guys are incredible.