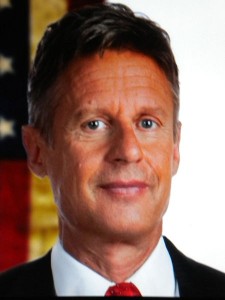 People should really pay more attention to Gary Johnson. He may have a few crazy ideas and a slightly questionable haircut, but so do a shocking number of the cable TV pundits. And that doesn’t stop many folks from listening to them, ad nauseam.

In spite of his remarkably unremarkable name, Gary Johnson is lined up to be one of the coolest third-party candidates to get on the ballot in all 50 states. He is the Libertarian presidential candidate (yes, this year) and, right off the bat, there are a few things you might want to know about him:

(1) He has reached the highest peak on four of the seven continents (including Everest),

(3) He used medicinal marijuana as recently as 2008 as he was recovering from a near fatal paragliding crash, and

(4) He may struggle with politicking at the national level because he is cripplingly honest, I mean no-spin honest.

Oh, and he also wants to abolish the IRS, so that’s pretty crazy.

Johnson was the Republican Governor of New Mexico (a blue state) from 1995-2003, where he made a name for himself vetoing 750 bills (more than the other 49 governors combined) and leaving the state with a $1 billion budget surplus.

Last year, although he barely showed up on the public radar, Johnson was a candidate for the Republican presidential nomination. Much to his chagrin, he was shut out of most of those debates. But he made good use of his few short minutes; at the Florida debate in September he delivered what many touted as the best line of the evening: “My next-door neighbor’s two dogs have created more shovel ready jobs than this administration.” It wasn’t exactly the message he wanted to get out, but he was happy that it brought as much media attention as it did.

After Johnson withdrew from the race for the Republican nomination (he did not gain much momentum there), he quite handily won the Libertarian nomination on May 5, 2012. One of his lofty goals at the moment is to work his way into the upcoming presidential debates with Mitt and President Obama. If he pulls it off, he hopes to exploit flaws in their platforms: “Look, if I’m in the debate against Romney and Obama, they’re going to change their tune,” he said. ” They’re going to have to.”

Short-lived Republican presidential candidate and former Louisiana Governor Buddy Roemer has called for Johnson to be included. But Johnson’s chances of getting into the debates is slim to non-existent. The Commission on Presidential Debates won’t consider him unless he has an average of 15 percent in the polls. But Johnson has had trouble just getting on the polls, and when he manages to do so he usually only gets a few points (in one March poll he achieved 7%). His supporters have levied their polling angst against CNN because it has not included him in its polls since last September; earlier this month, 100 protesters stood outside CNN headquarters in Atlanta demanding that the network “Include Gary!”

Those protesters are just one indicator that Johnson will likely do a lot of work and cover a lot of ground in the next few months. Some libertarians and trend-watchers are likely anxious to see how the saga of Ron Paul unfolds at the Republican National Convention at the end of August, as Paul supporters could shift over to support Johnson. Johnson actually includes Ron Paul on his list of endorsements. That list also includes Penn (of Penn & Teller), former Minnesota Governor Jesse Ventura, Barry Goldwater, Jr., and Willy Nelson.