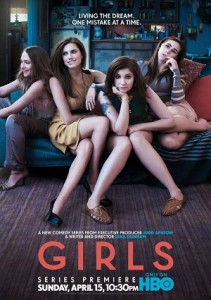 Girls has gone bad, and if this trajectory continues, my devotion will die. First, I fundamentally object to Lena Dunham’s excessive nudity. Though it seems to be politically incorrect to suggest that overweight chicks should not be naked on screen, allow me to be politically incorrect. It’s disturbing and unenjoyable to watch. Furthermore, she accentuates her flaws by finding every undesirable pose and clothing choice possible, as if she’s swimming in the criticism. And before I get attacked for this, I’d like to point out that I also object to Laura Linney’s consistent boob-reveal in every movie, so as to prove that my outrage is not just about the weight — it’s about the gratuitous choice to assault the audience with some free-nudity movement I never signed up for. Lastly, what on earth would justify filming yourself on the toilet while trying to avert the pain of a urinary tract infection? I’ve heard of telling life-truths, but if I won’t even pee in front of my significant other, I certainly don’t want an actress to pee on screen in front of me.