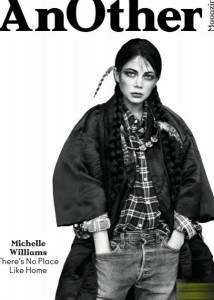 I’m constantly criticizing celebrities for their lack of creativity in photo-shoots, so I’m conscious of attacking Michelle Williams for her “redface” photo controversy in AnOther Magazine. That being said, it doesn’t quite sit right. To properly assess whether it’s offensive, I’ve asked myself how I’d feel if a non-Jewish celebrity dressed up as an Orthodox Jew for a photo-shoot. In short, I wouldn’t be happy. You don’t need intent-to-offend to be offensive. That claim applies to AnOther’s response, which is below. Sure their intent was pure and based on art, but that’s wildly irrelevant. To be fair, Williams’ PR team is mostly to blame for consenting to this idea. They are also to blame for her subsequent silence. If I were her, I’d apologize and exit this mess as quickly as possible.

“While we recognize the seriousness of this debate, the image in question in no way intends to mimic, trivialize or stereotype any particular ethnic group or culture, as recent reports suggest. [Williams is presented in a] series of eight different imaginary characters. All the characters in the story were inspired by multiple fashion and cultural references, characters and eras, as well as by our admiration of Ms. Williams as one of the most respected and talented actresses of her generation. While we dispute the suggestion that the image has a racist subtext in the strongest possible terms, we’re mortified to think that anyone would interpret it in this way.”