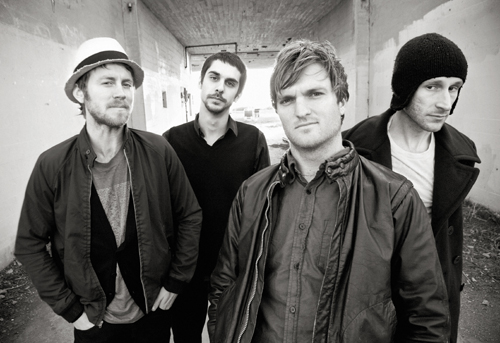 Why did you choose these particular covers?

At the end of scoring [Dear Miss Lonely Hearts], our friend Richard Swift came down, and he was weighing in on a bunch of stuff and working on a bunch of art. We were having so much fun and those [covers] came out of that time. It’s almost a way to reveal yourself and show the songs that inspired our record. These are songs that in some way tell the story of where we are right now. There’s something that feels very transparent about that that is kind of nice. Whether it’s saying that these are our influences or the act of playing songs after you’ve been recording for months, playing songs that are already written feels really good.

Yeah, I think that’s true. It’s just so much easier to be in somebody else’s poetic song. [When] you release music to a wider audience it comes with all the necessary questions of “Who is this about?”, “Who is it for?”, and “What does it mean?” All of those questions are good questions, but in some ways you have to keep those questions kind of a mystery to yourself to be able to write songs. Even from the time of our first record I felt a little kind of invaded upon about the songs and their meaning. All these things never really occurred to me before, and in some ways that self-awareness kind of stifled me. You know it’s never good for anybody.

Do you look back on those first records and discover meanings that you didn’t realize initially?

Yes, definitely. That’s a really weird thing that I have experienced. There’s certain things that I am more comfortable with now, like, “Oh yeah that song is definitely about this.” But at the time I just didn’t know the answer. Talking about your music while also not being so transparent is a real talent that I am probably better at now than I was at the beginning.

You’ve said that your lyrics have become more personal. Would you say that’s because you’ve become more comfortable with all those invasive questions?

Yeah, I think so. It’s the weird anxiety of somebody looking at something that you wrote and twisting it or making it say something that it’s not saying. You can’t worry about that at all, and it takes thick skin to get to that place.

I know Cold War Kids is known for its live performances. This EP captures that magic. Do you view the recording process as almost a tedious way to capture that sound?

Yeah, that’s actually really well put. We have always, always had that problem. [When we’re on stage, it’s a] totally raw experience. We perform songs just a little bit different every night based on everything happening around [us], and then [we’re] in a studio and it’s dry and dead. You can play live and have this huge relief with each other, but recording is different. It’s harder to have that big relief because you’re fine tuning and turning knobs and you’re doing things multiple times. It’s just a different experience. But we’re always striving to get to that place.

Have you ever been surprised by the reaction to something you’ve released?

Yeah, extremely. I know for us the first period of doing really, really well was total utter shock. We were all living in a tiny, tiny house and we were shocked with the place we elevated to, the size of audience we were playing, and people who knew our story. The opposite side of that was definitely our last record, Mine is Yours, where we thought we did everything the right way. You think it’s really going to hit home on every level, and then it just kind of gets passed over like that record did. A lot of the process after Mine is Yours was about saying, “Whoa, maybe we have changed over the last few years of record making and touring . . . and we got too aware of our environment. Maybe we need to learn how to forget about ourselves again and not think about our place in music or making a big statement, but rather just do what [we] do.” If it’s really fun and great and you love it, then other people will like it or not like it. But you will be happy either way.

So you’d say that after the reception of Mine is Yours you became less in your head rather than the opposite?

Initially we suffered from the reaction or lack of reaction. We definitely felt like, “Wait a minute. We put everything on the table for this.” After that we just said, “Man, what happened? Is there anything we can point to and say this is what we need to fix?” We’ve been fortunate to have the really rad audience that follows us. Because of that we were able to say, “Let’s just keep going. Let’s move on and try to strip away the things that weren’t working.” [While touring] this new record, Dear Miss Lonely Hearts, it’s really interesting to see that there are lots people that became fans of our band because of Mine is Yours, and that’s really special. It kind of reaffirms not to get lost in [questions such as,] “Was it a label mistake? Was there something that I just wasn’t seeing that I should have done differently?” You just have to keep moving forward.

Listen below to the title track of Cold War Kids’ EP, Tuxedos, and click HERE to catch them on tour.