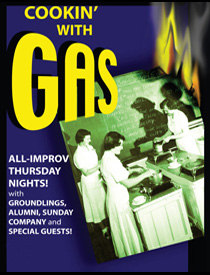 When you enter The Groundlings theater, it feels as if you’ve discovered a far-off place in LA LA LAND where everyone comes to play and imagination is limitless. The sketch comedy troupe was formed in 1974, and its produced some of Hollywood’s best players, including Jimmy Fallon, Will Farrell, Cheryl Hines, Jack Black, Lisa Kudrow, and many more.

Last Thursday, I attended ‘Cookin’ With Gas,’ an all-improv show that’s ruled by suggestions from the audience. Some shout-outs are more original than others, and it’s up to the director to steer the ship in the most creative way possible.

Though the Main Company make their on-the-spot antics seem easy, it’s far from it. In fact, the mere rigor of The Groundlings audition process explains why this heavily vetted group can produce such comedic variety with so little preparation. They’re play-time powerhouses, and the packed theater each week is deserved.

Though there are many shows on the schedule worth seeing, ‘Cookin’ With Gas’ is a sensational standout. And in case you’re looking for the right reason to attend — I’d advise you to bring a date. You can tell a lot about people by what makes them laugh the hardest.