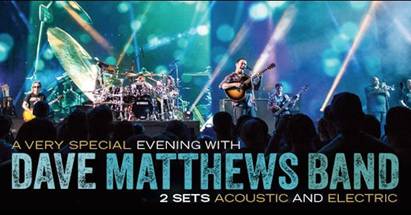 After being dubbed as one of the “Top 50 Greatest Live Acts Right Now” by Rolling Stone, L.A. natives need to make room in their calendars to see the Dave Matthews Band in their single L.A. area performance on Saturday September 6th at the Verizon Amphitheater. The band will perform favorite hits from throughout their entire career in a two set per night called “ A Very Special Evening with Dave Matthews Band.” Tickets go on sale this Friday February 7 at 10 AM on ticketmaster.com and livenation.com as well as via charge-by-phone at 800.745.3000. Dave Matthews Band has been ranked as the biggest ticket seller worldwide of the past decade having sold a collective 37 million CDs and DVDs combined. Keep an eye out for the band’s new album with producer Rob Cavallo coming out later this year.