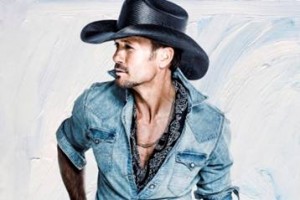 Saddle up for Tim McGraw’s SUNDOWN HEAVEN TOWN TOUR! The tour kicks off this May at the Verizon Wireless Amphitheater and it celebrates the release of his album, Two Lanes of Freedom. Since the new year McGraw has tallied up two GRAMMY nominations and seven Academy of Country Music Awards nominations including Album of the Year, Single Record, and Vocal Event. His lead single “Lookin’ For That Girl” debuted at #10 on Billboard’s Country Digital Songs chart.

“This last year was unbelievable, and I don’t have any plans to let off the gas now. We didn’t want to waste any time getting new music out,” said McGraw. “With every album, my approach is to push a few of my own boundaries and try things I’ve never done before. It was hard to choose a lead single off this project because I really felt like we had six or seven good options. I kept coming back to ‘That Girl’ because even though it may be a little different for me sonically, I couldn’t get it out of my head!”

On the tour, Tim McGraw will be joined by rising star and season 3 winner of NBC’s “The Voice,” Cassadee Pope. Since the release of her album, FRAME BY FRAME, Cassadee has over 1.7 million tracks sold to date. Tickets for the SUNDOWN HEAVEN TOWN TOUR go on sale next Friday February 14 at 10 AM and will be available at ticketmaster.com and livenation.com.