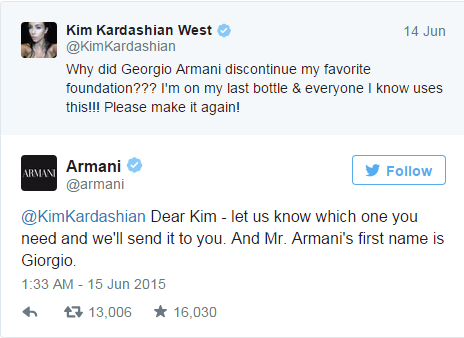 When you’re Kim Kardashian, the Twitter Gods can grant you just about anything, including discontinued foundation courtesy of Giorgio Armani, along with a stern schooling on how to spell the iconic designer’s name. Though it’s obviously an innocent mistake that could be made by just about anyone, everyone knows about Armani’s attention to detail, so the idea that he’d take some special time to correct a Kardashian gives me sweet satisfaction. Also, now that she’s making a spirited attempt at high-end fashion, there’s an extra special bow on top of this mistake. The brand has since deleted the tweet, presumably because they don’t want this type of attention. My advice? This is the exact type of attention they should want.