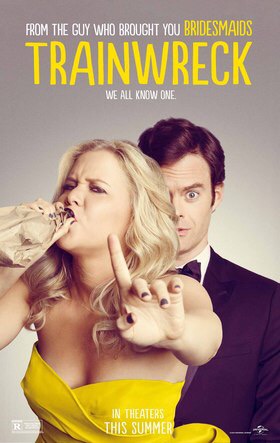 Instead of rejecting the word “skank” as some affront on feminism, perhaps we should just insult men more. I get it. Amy Schumer’s not a “Trainwreck” because she’s sluts around town, she’s a “Trainwreck” because in doing so, she’s running from her happiness while simultaneously celebrating her womanhood with random, unemotional sex. Did that explanation make sense? Well if it didn’t, just know that Amy Schumer doesn’t either, given her reaction to the interview below. When an interviewer referred to her character as “skanky,” Schumer was noticeably bothered, and when he furthered his explanation by stating that her desire for men “eclipses all else,” she was also peeved.

I saw ‘Trainwreck,’ and it’s entertaining from start to finish. It’s also refreshing to see a woman unapologetically own the actions traditionally reserved for Hollywood men.  Additionally, Amy Schumer looks like an actual person, so that’s good too. But this over-sensitive, sexism takedown is getting ridiculous, and I’d expect a comedian to take a joke. Perhaps the interviewer missed the point, but his phrasing is more objectionable than his intention, and it certainly doesn’t warrant this viral attack on his approach. Need I also point out that the title of this film is ‘Trainwreck,’ which seems far more objectionable than “skank.” Did I miss the memo on how the word “trainwreck” celebrates women?