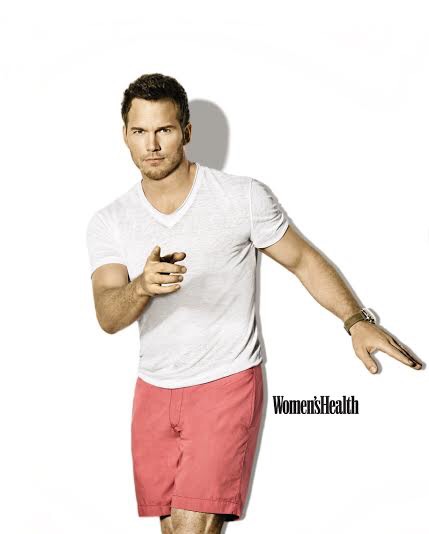 Solidified box office star and resident hunk Chris Pratt sat down for a chat with Women’s Health for their ‘What Men Think’ column, and he answered five juicy questions for his female fan base, Read and enjoy.
5 Juicy Questions with Chris Pratt

“Well, scientifically it’s a fact, because you can look at the polarity of the water molecule and the capillary action of ice and water. [Laughs] It can be true in real life, too, but I don’t think it’s a rule. If you’re like Anna [Faris, Pratt’s wife] and myself, we’re very similar. We married ourselves because we have comparable egos and abnormally high self-esteem.”
2. Is it ever okay to lie to your partner?

“Honesty is the best policy, but being mindful of someone’s feelings is also very important. It’s not okay to lie, but it is okay to protect your partner. And understanding the difference requires wisdom.”

“Yes. But it’s a fine line. Keep it classy. Don’t be gross. I don’t mind PDA; I do mind GPDA, which is Gross Public Displays of Affection.”

4. When was the last time you were really scared?

“Parenting comes with a lot of fears—some rational, some irrational. Jack, our son [age 2], has had a couple of surgeries. Those were scary. He just had one recently, and I knew he would be fine because it was a minor thing and he’s had it done before, but you can’t help but get scared when your kid is going under anesthesia.”

5. What would the reality show about your life be called?

“Hollywood Squares. It’d be a throwback to the old game show, except instead of us playing tic-tac-toe and answering pop-culture triviaquestions, we would just sit around and watch The Bachelor and make meals. It would be super boring.”