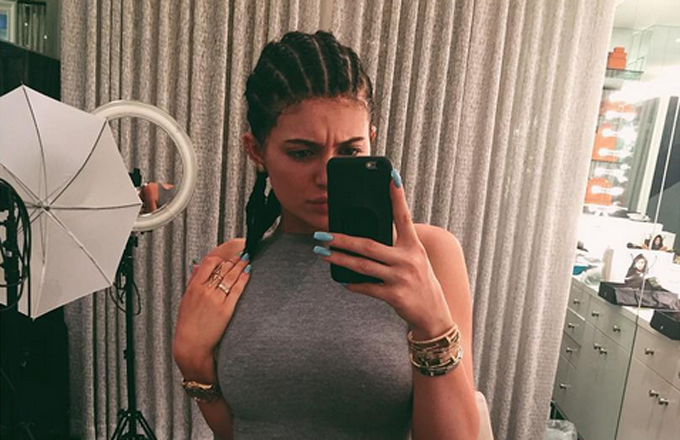 When it comes to celebrity controversy, I’m constantly asking whether it’s appropriate for famous people to take on huge sociological issues. The latest fued involves Kylie Jenner and Amandla Stenberg, who took the privileged tart to task for posting a picture with cornrows via Instagram and claiming “cultural appropriation,” asking “What would America be like if we loved black people as much as we love black culture?” Jenner was predictably pissed, saying “Mad if I don’t. Mad if I do…Go hang w Jaden or something.”

Stenberg’s argument is interesting, and it deserves exploration. White people have adopted many elements of black culture, and when they do, it’s often celebrated. When Bo Derek debuted her dreads, she was seen as a cultural icon, yet black people had rocked the same style for years, with no such response. That being said, black people constantly adopt white culture (via hair straightening, etc, and that’s often deemed “white-washing” from their own culture and arguably a response to objectionable social norms). But is it wrong to borrow trends from other cultures? I have an awesome pair of harem pants with eclectic patchwork created by a designer visiting Austria from Africa, and each time I wear them, I think of her and how excited she was to sell them. Should I be chastised as a silly white girl adopting a trend I have no business wearing? While hair and fashion come with its own set of differences, the general principle remains the same. When Laverne Cox was asked on Watch What Happens Live for her take on the controversy, she quickly exited the argument due to a confined, ten second format. She has since written a lengthy essay with more explanation. She still elegantly avoided a clear side in the debate, which might be a good thing. Conversation can always yield more results than scolding.

As for Kylie Jenner, the larger issue is that she’s annoying, and her cultural appropriation has gone far beyond simple “influence.” She’s dating a black man, rocking dreads, exponentially increasing the size of her ass, plumping her lips, and using verbiage on instagram such as “I woke up like disss” She’s an easy target, and were she a little more educated, intelligent, and capable of an informed response, perhaps this debate would enter healthy territory.