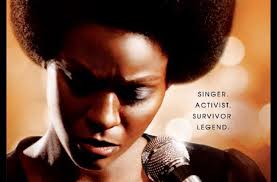 Hollywood might have convinced us that cinched waists, bird legs, and tiny noses are all the rage, but what happens when we call upon our A-listers for bio-pic roles that are based on people who actually looked normal? When everyone looks the same, who can step in? The trailer was released for the new Nina Simone film starring Zoe Saldana, and Simone’s estate has bluntly voiced their displeasure, which actually began in 2012 when Simone’s daughter, Lisa Simone Kelly, told The New York Times that her “mother was raised at a time when she was told her nose was too wide [and] her skin was too dark. Appearance-wise, [Zoe Saldana] is not the best choice.” But the controversy goes a step further. Instead of simply accepting that Saldana doesn’t look like Simone, they darkened her skin and gave her a prosthetic nose, much to the dismay of both the public and the estate.

There are two issues here. First, is it wrong to use “blackface” when the actress is black, or is it only offensive when a white person does it? The history of blackface is worth noting before that question gets answered. The theatrical makeup (which included burnt cork and greasepaint) was used by white performers during the 19th century in minstrel shows where white men donned black makeup with exaggerated features and acted out offensive stereotypes of black people, most notoriously “Jim Crow” and “Zip Coon”. By 1840, black performers were also engaging in the practice, which was later condemned by other black leaders, including abolitionist leader Frederick Douglas. When Vaudeville entered the scene in the 1880’s, black performers were only allowed on stage in “blackface,” and this is how many black performers got their start. The practice now considered racist, and rightfully so (just ask Harry Connick Jr.).

It goes without saying that this is a lazy casting choice. The filmmakers would have been far better off doing the leg-work required in finding an on-point unknown that is perfect for the part, or perhaps just cast the very talented Viola Davis. But since Zoe Saldana was chosen, let’s answer the question. While it might not be AS offensive for a black person to don blackface, it’s still offensive. It’s also a poor creative choice, because it’s extremely distracting. Zoe is talented enough to take us inside this role without looking exactly like Nina Simone. Furthermore, let this be a lesson to every actress who has relinquished their larger nose in favor of traditionally white standards of beauty. This is your face. And there is no need to remove its character. Sure I’m a biased person with a large schnoz, but I can play Streisand if they need me.