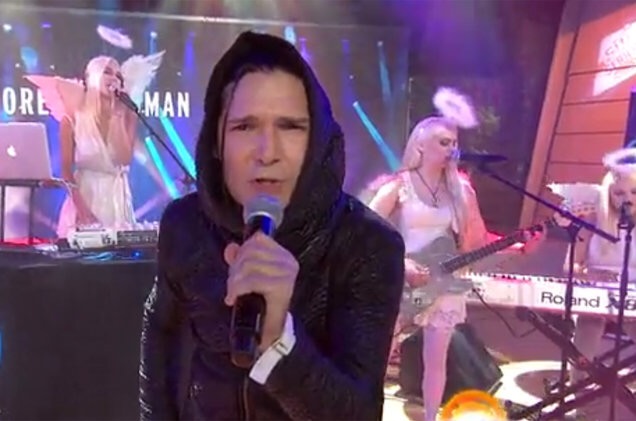 Following up his much-talked about performance of “Go For It” on ‘The Today Show’ the Goonies star is back for what’s been billed “Corey’s Comeback,” and this time he’s performing “Take a Stand” from his new album, ‘Angelic 2 the Core.’ When Feldman first performed “Go For It,” he was met with heavy online criticism, and Feldman subsequently cried in response. Stars and fans quickly came to his defense and the public’s conversation turned to questions about twitter trolls and the mean-spirited hatred we see so often with online bullying. Though I feel sorry for Feldman for many reasons and wish him the absolute best, my take on this is much more complex.

Los Angeles is latent with an insane entitlement from both deserving and undeserving celebrities. When the world caters to your every need and want, you become a spoiled infant. Such is the case, I believe, with Corey Feldman. Maybe he’s a nice, kind person, but his music is not good enough to be featured on ‘The Today Show,’ and the only reason he got there is because of his former fame, and because the producers obviously knew what they had on their hands. They knew he would be laughed AT (not WITH), but they booked him regardless. They got greedy, wanted extra eyeballs, and got them at Feldman’s expense. Had Feldman been in on the joke, I’d have been happy to join his party, but I won’t point my finger and laugh at someone. There are thousands of indie artists dying for exposure (I can name 100 of them off the top of my head) that are more deserving of a slot, and they should be booked instead. Lastly, shame on ‘The Today Show’ for booking Feldman AGAIN. They can mask it as a kind gesture for the guy that had his feelings hurt the last time around, but I know the truth. And the truth is they once again got greedy.

If Feldman wants to make money, perhaps he should go back to school or learn a trade. Maybe he should get a desk job and work a 9 to 5 like the rest of us. He had his time in La La Land, and not everyone gets to continue their most-desired career for eternity. The idea that Hollywood or the music industry is readily accessible for any and all artists that once reigned supreme brings me back to my original point about entitlement. Sometimes jobs don’t work out. Like every other person in America, send your resume out and see who bites.