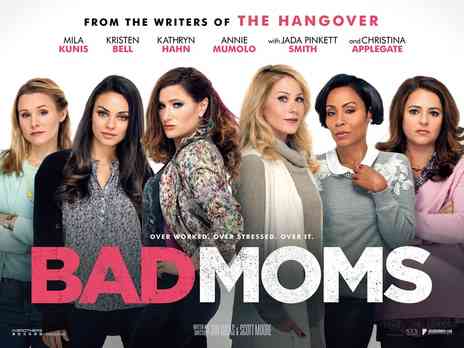 If there was ever a movie about basic bitches, ‘Bad Moms’ is it. This poor man’s ‘Bridesmaids’ also proves the importance of having diversity in the writer’s room, because never before have I seen such whiny, white privilege. I like the idea of good girls gone bad, but if turning up the dial on one’s boxed in life means ditching school activities in favor of champagne at lunch, then these ladies not only need a lesson in real fun, but also in living in the shoes of those less fortunate. And speaking of diversity, Hollywood is still far behind the rest of the world, as the only black person in this cast is Jada Pinkett Smith, who has almost no lines, in addition to wearing outfits made for a shiksa queen. It’s offensive and nearly cartoonish in 2016 to cast someone solely for the purpose of avoiding the very point I’ve made in this review.

‘Bad Moms’ stars Mila Kunis, Kathryn Hahn, and Kristen Bell, who play the overworked, under appreciated mothers in need of a break, and Christina Applegate foils as the buttoned-up PTA nemesis with Pinkett Smith to smile and nod at her snotty tone. Concepts can only go as far as the creativity behind it, and the trite writing, coupled with the prosaic escapades just doesn’t cut it. I’d also like to point out that Kristen Bell and Mila Kunis should have swapped roles. Bell is far more capable, and though I’m a fan of Kunis, she doesn’t present enough depth to this character. For example, you’d think she’d take more than a few days to get over her husband’s infidelity before embarking on a quest to “get laid.” I realize it’s a comedy, but comedy often requires stronger acting chops than drama, and Kunis is more of an ensemble player than a leading lady. As for Bell, she’s a star, and she’s only gotten more polished and capable with time, effort, and the right choice of roles.

I’m always rooting for a female-led comedy, but this one just fell short of the mark, which explains it’s lackluster returns. My apologies for this extremely belated review, but plane time means movie time, and I simply couldn’t resist voicing my objection.