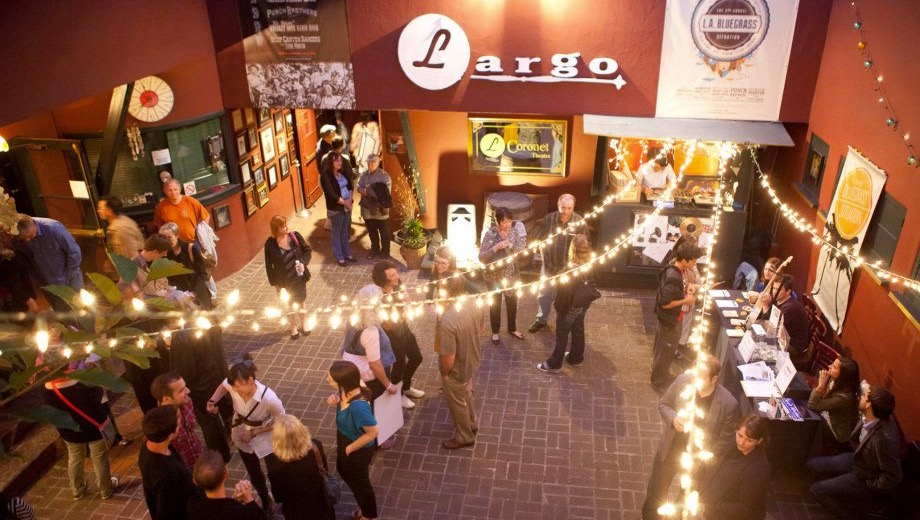 For those that don’t know Largo at the Coronet in Los Angeles, it’s a hot spot for high-level comedians and a very in-the-know experience. In fact, they barely advertise, relying solely on word of mouth. That idea fosters its high ticket fee, with no less than $30 ahead ($40 for last night’s show). That might not seem like a lot to most, but when I can see two hours of The Groundlings for $18, Louis C.K. at The Comedy Store for $20, and my favorite band at The Greek for $60, your fee better come with a five-star experience.

Upon entering Largo, I was met with a surly hostess who could not find my name on the list. Instead of inquiring as to the misunderstanding, she insisted I did not in fact purchase a ticket, turned her back to me, and clearly desired to carry on with her other customers. “No,” she said, “You don’t have a ticket.” As I stepped to the side to find the receipt on my phone, she again seemed irritated, only to meet my digital evidence with an insistence that the entire debacle was my own fault, as I spelled my name wrong. “You didn’t spell your name with an H,” she said, “You said ‘A.'” Floored and flustered, I said, “I spelled my name correctly. It’s loud. Perhaps you didn’t hear it.” She once again repeated herself with no subsequent apology. When I also realized my friend had purchased an extra ticket by mistake and asked if I could give my own ticket to another customer, she turned her back to me again. Ticket wasted, I gave up, and entered the theater moderately enraged. Expecting an usher upon my arrival to help me to my seat, I was surprised to discover a cardboard map on an easel in place of an usher. I’d once again like to reiterate my original point. If you’re going to charge me $40 for my ticket, give a job to someone in need to direct people to their seats. Anything less is unacceptable. Additionally, if you’re going to use a cardboard poster, learn a thing or two about branding and hire a graphic designer to make it pretty-damn-appealing for the eye. It’s as if Largo has taken it’s underground popularity for granted. Just because people are buying your tickets, doesn’t mean you can treat them poorly. It’s easy to be kind. And I 100% promise that my personal attitude was undeserving of such unjustified disdain.

Now for the actual show. I paid to see The Writers Panel’s 300th Episode celebration featuring a large group of writers discussing their experience on top television shows. It is based on a popular podcast hosted by Ben Blacker, who is himself a writer. The panel featured many talents from various genres, but it would be hard to say who did what, considering Ben Blacker failed to introduce each guest’s accomplishments before asking them questions. He therefore worked under a very hefty assumption that we all had their IMDB profiles at-the-ready, and I must say I seriously considered googling from my seat to compensate for his failings. I did; however, remember Michael Schur (creator of ‘The Good Place’), Damon Lindelof (co-creator of ‘Lost’), and Jeff Greenstein (writer and supervising producer of ‘Friends’), as they were the only panelists to offer actual anecdotes about their writing process. The rest was a masturbatory ego-stroke between Blacker and his guests, rather than actual, substantive questions about their experience. To be fair, it’s difficult to offer true candor, given that this business is like the mafia where one must work with their enemies for eternity, but there are ways to get around that (without biting the hand . . . ), and Michael Schur might have been the only person to have accomplished it. Furthermore, there were far too many panelists and the format was flawed. What’s the point of bringing out three writers at a time, and leaving the rest of your guests to wait an hour and a half backstage? Surely they know how to let others have their moment. If you can’t adequately moderate your panel all at once, then get another moderator or alter the format. Moreover, Blacker seems like a perfectly nice man, but he needs to get out of the way of his interview. It’s not about him. He’s there to host. He’s not there to offer personal stories that bog down the process, and he’s also not there to wax on about how great everyone is. He’s there to get information that is helpful to the audience. That is it. It is also worth noting that he began the evening with an offensive aside about how the entire panel was mostly white men because that’s the reality of Hollywood today. Though I initially thought he was making a point about that sad fact, he followed it up with a note to the women and “people of color” in the audience to get an agent, because now’s the time. Need I explain that Hollywood’s white-boys-only club is about opportunity, NOT talent, and that women have been making failed attempts to break down that door for many years? If you’re going to hire your friends, and you’re a white man, you will likely hire other white men. Sure times are changing, but Blacker could have diversified that panel with a little more effort, and he chose not to. In fact, there were only two women up there, offering a huge opportunity to ask them about today’s changing times and their own experience as women in the writers room, and he did not take it. The entire show just felt like one huge missed opportunity.

I realize this critique might sound overly harsh, but it’s important to speak up for others to improve, and hopefully this is more constructive than critical. That being said, I likely won’t be returning to Largo anytime soon.