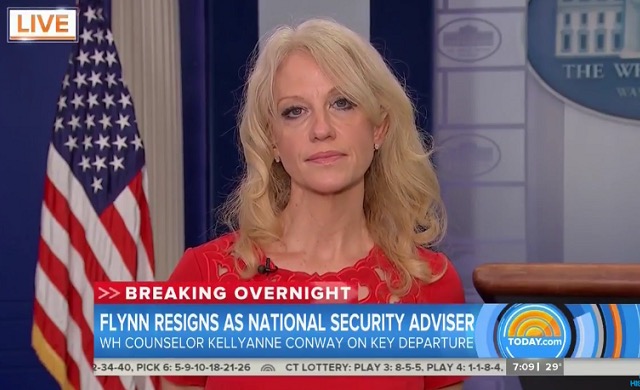 After an embarrassing interview on ‘The Today Show’ with Matt Lauer in which Lauer bluntly told her she “made no sense,” MSNBC’s “Morning Joe” has decided to ban Kellyanne Conway from appearing on their show, saying that the White House Counselor to President Trump is “out of the loop,” and clearly “in none of the key meetings.” They furthered that “she goes out and books herself often [on television shows] and “she doesn’t know, she doesn’t have the information.” Co-host Mika Brzezinski agreed with Joe Scarborough’s account, saying, she does “not believe in fake news.”

In case you missed it, Lauer asked Conway about Michael Flynn resigning as Trump’s national security adviser when information arose about Flynn’s contact with Russian ambassador to the U.S., Sergey Kislyak before Trump took office, thereby making him at risk for blackmail. Just two days after Flynn took office, The Wall Street Journal reported that Flynn was under investigation by U.S. counterintelligence agents for these communications. These calls occurred the same day President Barack Obama announced retaliatory sanctions for Russia’s alleged cyber-attacks against the Democratic Party. At the time, White House Press Secretary Sean Spicer said that the calls with Kislyak had nothing to do with the retaliatory measures, but U.S. intelligence officials countered that claim and indicated that such discussions did in fact take place. Acting Attorney General Sally Yates allegedly warned the Trump White House that Flynn had not been truthful and was therefore vulnerable to blackmail by Russian intelligence, but we know how that story ended.

Trump allegedly knew Flynn discussed the sanctions, but Mike Pence did not, and the Vice President went on television to deny any such conversation took place. When Kellyanne Conway insisted that Michael Flynn enjoyed the “full confidence of the President” the day before Flynn resigned, she stepped into a flaming pile of dung. Either she was out of the loop or she is not concerned about the ramifications of being a completely untrustworthy representation of the White House. It’s clear that Trump wanted to keep Flynn on staff and chose to request his resignation when the fallout became far too difficult to manage. Conway likely thought that he’d stay on staff, thus confirming her lack of access to the White House. Watch both videos below, and notice Conway’s clear exhaustion. Something tells me she’ll be removed from her post soon.