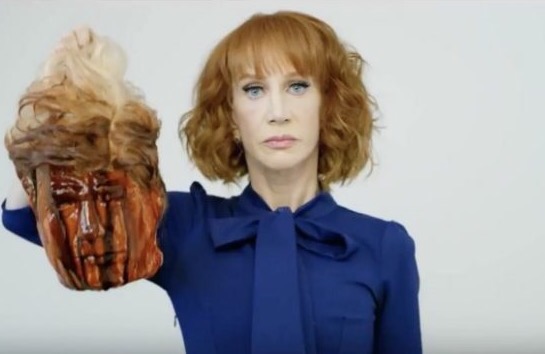 I’ve seen Kathy Griffin’s stand up. It’s largely focused on her pop-culture perspective and various run-ins with A-listers that take themselves too seriously. Her brand has always been about taking the piss out of Hollywood’s elite and saying everything we wish we could. But the world is changing, and her shtick has been heavily watered down by the influx of pop-culture commentators, including various podcasts, and even Andy Cohen, for example, who released an entire book that covered much of Griffin’s ground. I’m guessing she knows this, and her outrageous attempt to stay relevant backfired. Griffin was photographed holding a bloody, severed head of Donald Trump. In response, Trump’s son said, “Disgusting but not surprising. This is the left today. They consider this acceptable. Imagine a conservative did this to Obama as POTUS?” Donald Trump Jr. is correct. While you won’t hear me say we should respect our President under all circumstances, I also take representations of violence seriously, especially when it involves our Commander In Chief. If Griffin wants back in the spotlight, I’d encourage her to polish her act and evolve past its current state. This isn’t that.