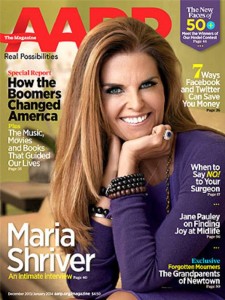 Maria Shriver covered the December/January issue of AARP Magazine, and she covered all the topics that inquiring minds want to know. Though she’s never directly addressed Arnold infidelity, she certainly brushed on the topic. Read some choice quotes below.

On being self reliant after Arnold:

“That’s certainly been a struggle for me…[In 2011], I was trying to reimagine my life. You have to be willing to let go of the life you planned in order to make the life you’re meant to live.”

“I’ve been blessed by my parents’ love, by the love I had with Arnold, by the love of my children and my friends. We’re so consumed as a society with “Do you have a boyfriend?” or “Are you married?” We miss the love that is staring you right in the face. I feel surrounding by love. I feel blessed now here in my life.”

“I don’t think about it that much. I try to surround myself with lots of young people who are full of life and energy and ideas…I’ve been loved, and I’ve loved. I wouldn’t trade my life for anyone’s.”

On what she’s still working on:

On dealing with grief:

“…we don’t have a culture for handling grief. Understand that there’s not something wrong with you, and that you will get through it, is probably one of the most important things you do.”

On her late father’s battle with Alzheimer’s disease:

“Alzheimer’s is a boomers’ disease…It rattles your whole family dynamic, and it’s not something that going to happen some other time. It’s happening now.”

“I was not brought up to put myself first, but you have to…It’s your job to know who you are. What do you value? What’s your mission? What makes you happy?”

On the subject of her upcoming “Shriver Report”:

“At The Women’s Conference we had these power women discussing “Can I have it all?” I started to think about the women who are left out that discussion. They’re not invited to the power conferences – they barely have time to wash their hair! I wanted to find out what those women need, what we could do differently.”

On raising her children:

“I feel that it’s my job on a daily basis to love my four children unconditionally and to focus on them…I’m really big on elevating people. I always say to my kids, “Our job here is to elevate each other. The world knocks you down.’”

On being a member of the sandwich generation:

“It’s emotionally challenging trying to raise your kids- and parent your parents at the same time. But not a day goes by that I don’t miss my parents. If I had a choice to have them here, I’d do that all again.”

There’s not much to say about Meryl Streep and Tommy Lee Jones other than they are two of my favorite actors in history. Read some choice quotes from their AARP Magazine interview to promote their new film, Hope Springs, opening this Friday.

On being “bored” in a relationship:

Jones: “I always told my children when they whined….Only the boring are bored.”

On finding passion at any age:

Streep: “I find the older I get, the more intense my appetite for living and for appreciating life gets…You realize you’ve got just seconds.”

Streep: “You live through all sorts of stuff when you’re in a long marriage: real highs and lows, and things that strain—and solidify—your relationship.”

Streep: “I don’t think it’s unusual for my friends and people my age [to feel the way I do]. I only see bored 20-year-olds. I don’t see any bored 60-year-olds.”

On what drew them to Hope Springs:

Streep: “I like things that seem like they have a problem…Built into it was something really funny but lodged in something very real.”

Jones: “At long last, I had a chance to work with Meryl, so there was no question in my mind that I wanted to do it.”

On their prolific careers:

Streep: “I think there’s not a sell-by date on actors…But you also understand what a crapshoot it is and how serendipity plays a huge part. It’s not a piece of cake by any means.”

Jones: “I’ve been lucky-and happy. I’ve made some bad movies. And I really enjoyed it!”

On passing the acting torch to their children:

Streep: “I’m delighted that we can share some things and that I have some experience that can be of comfort to her.”

Jones: “It makes you feel good when your kids choose to do the thing that you do even as much as you come home and complain about it.”

On endlessly pursuing their passions:

Streep: “I like everything. There’s just not anything I don’t like to do. That’s the problem. It means I’m very distractible.”

Jones: “I like being a director, and I’m never going to stop being an actor.”

Diane Keaton is one of my favorite actresses in Hollywood. She’s a fearless legend who never compromised her individuality for the Hollywood bigwigs. Enjoy quotes from her AARP interview below. 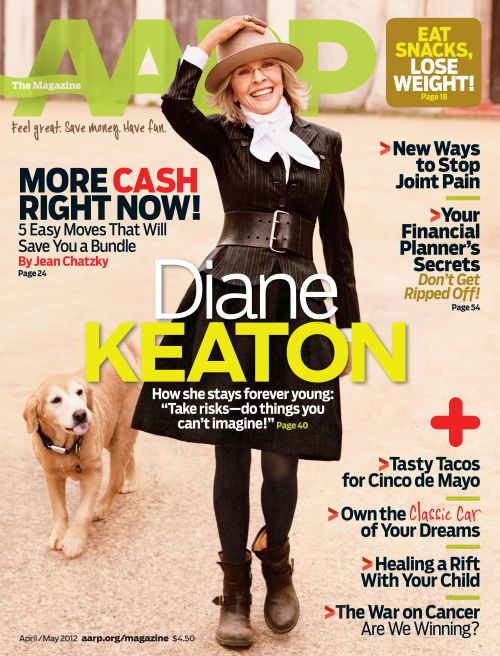 “Let me tell you the best part about getting older. The best part is that I’m still here and, because the end is in sight, I treasure it all more. That’s why I don’t worry about crying in a scene anymore. Now it comes easily. I know the emotion’s all there.”

“You have to live life that way, you know? Take risks. Do things you can’t imagine. ’Cause hey, why not, right?”

On the Possibility of Plastic Surgery:

“I haven’t had it, but never say never. Because when you do, you are definitely going to go there. I said I would never have intercourse before I was married, and I did. I said I would never go to a psychiatrist, and I spent much of my life in psychoanalysis. I’ve done all kinds of things I said I wouldn’t do and, of course, now I’m glad. Thrilled.”

On Her Battle with Bulimia:

“With bulimia, I never expected sympathy or for people to understand. What I cared about was the secret I kept. It felt like a burden. I never told my mother.”

“It’s amazing how the dark secrets inside us don’t matter much to the outside world.”

On Her Dream Role:

“A really out-there role where I let it all hang out. Get totally enraged. Go to an extreme. I have not really had that opportunity, and I hope it will happen.”