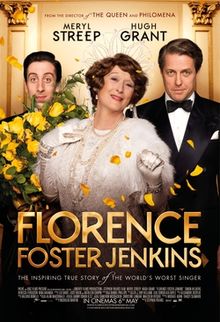 If you’re in search of good old guffaws, then dive into the YouTube den to catch Britain’s Graham Norton, who is far superior to any of our United States late night hosts. His group gathering on the couch awkwardly brings together some of Hollywood’s biggest names to share the spotlight, and with Norton’s sharp one-liners, it doesn’t miss. Watch below to see a clip of Hugh Grant beside Meryl Streep, as the surly actor recounts his most contentious on-set relationships.

Meryl Streep seems like the type of actress I’d like to have a drink with. Watch her very funny honesty below, when Andy Cohen asks her on ‘Watch What Happens Live’ which one of her three costars she’d like to shag, marry, and kill. Who’d she kill?
There’s not much to say about Meryl Streep and Tommy Lee Jones other than they are two of my favorite actors in history. Read some choice quotes from their AARP Magazine interview to promote their new film, Hope Springs, opening this Friday.

On being “bored” in a relationship:

Jones: “I always told my children when they whined….Only the boring are bored.”

On finding passion at any age:

Streep: “I find the older I get, the more intense my appetite for living and for appreciating life gets…You realize you’ve got just seconds.”

Streep: “You live through all sorts of stuff when you’re in a long marriage: real highs and lows, and things that strain—and solidify—your relationship.”

Streep: “I don’t think it’s unusual for my friends and people my age [to feel the way I do]. I only see bored 20-year-olds. I don’t see any bored 60-year-olds.”

On what drew them to Hope Springs:

Streep: “I like things that seem like they have a problem…Built into it was something really funny but lodged in something very real.”

Jones: “At long last, I had a chance to work with Meryl, so there was no question in my mind that I wanted to do it.”

On their prolific careers:

Streep: “I think there’s not a sell-by date on actors…But you also understand what a crapshoot it is and how serendipity plays a huge part. It’s not a piece of cake by any means.”

Jones: “I’ve been lucky-and happy. I’ve made some bad movies. And I really enjoyed it!”

On passing the acting torch to their children:

Streep: “I’m delighted that we can share some things and that I have some experience that can be of comfort to her.”

Jones: “It makes you feel good when your kids choose to do the thing that you do even as much as you come home and complain about it.”

On endlessly pursuing their passions:

Streep: “I like everything. There’s just not anything I don’t like to do. That’s the problem. It means I’m very distractible.”

Jones: “I like being a director, and I’m never going to stop being an actor.” 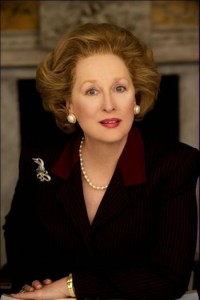 I know Meryl Streep is a genius, but she still consistently exceeds my expectations. Is that even possible? She’s brilliant, and the trailer for ‘The Iron Lady,’ is no exception. When I first heard about the Margaret Thatcher biopic, I thought, “another one of these?” Then I heard that Meryl Streep was attached and I thought, “now that’s a film I want to see.” I’m told Streep has worked with the same costume designer for years, and for ‘The Devil Wears Prada,’ it was Streep’s idea to lose weight for the character. In fact, when the ladies of ‘The View’ asked Streep if the producers suggested she lose weight for the role, Streep said, “they wouldn’t dare!.” Watch the trailer below.
It’s common knowledge that Meryl Streep gets nominated for an Oscar practically every year.  When she loses, most people don’t feel bad for her because she’s won it so many times.  The truth?  She’s only won twice.  Though her sixteen nominations make her a record holder, her last win was 27 years ago with ‘Sophie’s Choice.’  The point?  It’s okay to root for her the next time she’s nominated.