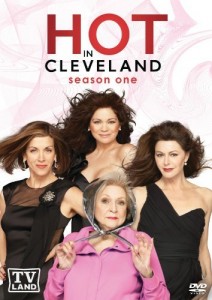 I was lucky enough to get invited to the Hot in Cleveland panel at The Paley Center.  The panel included: Betty White; Valerie Bertinelli; Wendie Malick; Jane Leeves; and series creator Suzanne Martin.  This was probably the best event I’ve ever been invited to since moving to Los Angeles.  First, it was incredible to see Betty White’s improvisational comedic brilliance in action.  I’ve seen her execute this unique talent on various talk-shows, but seeing it in person will be forever etched in my memory.  White discussed how she only planned to star in the Hot in Cleveland pilot, because her intense work schedule didn’t allow her time for the series.  Because she “has the backbone of a jelly-fish,” as White put it, she relented after much coddling from the studio.   When an audience member asked the panel to choose their all-time favorite co-stars, White said, “Bea Arthur, Rue McClanahan, and Estelle Getty.”  I’m not embarrassed to say that I got slightly choked up by her response.  After seeing these women interact, it’s clear to me that they actually like each other’s company.  I can spot a Hollywood lie when I see it, and these ladies are legitimate.  Wendie Malick was also a favorite, not only because she snorts when she laughs, but also because she had a very funny description of Susan Lucci, saying, “Lucci’s so tiny, her leg is as big as my arm.”  Malick also had a hilarious exchange with Valerie Bertinelli.  When Bertinelli said she removed the part of her wall where she measured her son’s height because of its sentimental value, Malick asked, “did the house fall down?”  The panel laughed, at which point Suzanne joked that she gets her material from the actors true personalities.  It’s always fun to see the origin of how great television shows are made, and these ladies certainly delivered the information in an entertaining way.  My only critique involves the moderator, who wasn’t equipped for such a hefty task.  When I turned to my friend to lambaste the moderator’s terrible questions, a woman behind me barked in my direction, saying, “I completely disagree.  She was good because she got out of the way.”  If “getting out of the way” means excessive gushing coupled with impertinent questions, then yeah, she got out of the way.  Thank goodness these comedic veterans were equipped to run the show.
Betty White and Tracy Morgan shot the cover for New York Magazine, and she’s just as hilarious behind the scenes. Watch the video below.
Betty White continues to show up the youngters.  Her Saturday Night Live hosting gig scored the biggest numbers since the 2008 pre-election days. Her career certainly has spanned generations.  She went from a vixen on Mary Tyler Moore, to the doe-eyed sweetheart on the Golden Girls, and finally, to becoming a facebook sensation!  You go girl! Watch her open the show below.
I confess that I took some liberties with the title of this post, but the real story is just as exciting.  Betty White will be hosting SNL, with Jay-Z as the musical guest.  Tune in on May 8th to see them in action.  White says she turned down SNL in the past, but she accepted this time because her agent said “he would divorce her if [she] didn’t do it.”  SNL executive producer Lorne Michaels is also thrilled, saying in an interview with USA Today that he “always wanted” her to host.
Betty White’s career is on fire lately, and she sure deserves it.  I cannot wait for her to host Saturday Night Live.  Watch her below on ‘The Tonight Show.’