Skip to content
If you know anything about MTV’s The Challenge, then you know that Diem Brown and Chris Tamburello had the most romantic love story ever told — until it crashed and burned when Diem dumped “CT” to “find herself” while pursuing her career. And though I don’t want to kick the girl while she’s down, it’s fair to mention that Chris Tamburello is arguably the best looking man to ever walk the planet. Enjoy the new trailer for Rivals II below, and catch a glimpse of CT sans shirt. You’re welcome. 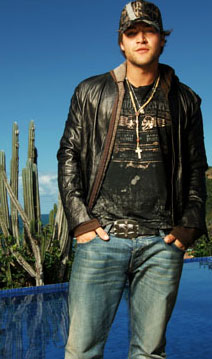 If you know me personally, then you know that when I want something — I won’t stop until I get it. That’s either because I’m ambitious, or because I’m spoiled. When I request interviews for The Dishmaster, those interviews are based solely on my personal preference. And that preference is dictated by one of two things: 1) I’ve been a long-time fan of your work or 2) I think you’re super hot, and I want to pick your brain to determine if our babies will be intelligent. In the case of Chris “CT” Tamburello, it’s a bit of both. I loved him on The Real World, and I loved his story on The Real World/Road Rules challenges. He fell in love with Diem Brown on the show while she was recovering from cancer, and he later got himself in trouble during a fight with Adam King, which was later explained when CT revealed he was mourning the loss of his brother’s passing shortly before the show began. He returned to MTV years later, and he redeemed himself while partnered with Adam King, which included many apologies and a clear desire to turn their on-air partnership and former rivalry into a post-show friendship. So why the CT biography, and where am I going with this? I want to interview the guy, and I can’t seem to find him. I’ve reached out in every way possible, and I’m hitting roadblocks. I have a million inside lines, and a slew of resources with talent representatives, and I still haven’t had any luck. In fact, I haven’t hit this many dead ends since I requested an interview with Colin Hay (yes, I’m being serious). So CT — if you’re reading this — I want you (pun intended) — and I won’t stop until I get you.

Note to CT: My email address is: Info@TheDishmaster.com.

There are very few reality show couples that I believe to be truly in love. But CT and Diem’s love story was one of the more magical things to watch. He fell in love with her when she was in her cancer recovery and her hair was just growing back, and she tamed the bad boy. When MTV brought them back together for another show, I was elated. After all, deep down inside I’m nothing but a hopeless romantic. Watch them discuss the show below. Here’s hoping the second time around is a charm. Further Reading: Dear Chris “CT” Tamburello — The Dishmaster Wants to Interview You

I stopped watching the Real World/Road Rules challenges many seasons ago, mostly because MTV started casting douchebags, and the show became boring and painful. But when I’ve run out of mindless television, I make an exception. This time around, I’m glad I did. If you’re a fan of the series, then you’ve heard of a certain infamous individual named Chris Tamburello (or “CT”). He’s infamous because he’s been kicked off the show multiple times for fighting, and at one point it looked like he might actually kill his fellow cast member. He’s my favorite cast member, because I’m superficial and he looks like a Calvin Klein model. Also, I have a soft place in my heart for the bad boy who falls in love — and he had a very touching story with a fellow cast member with cancer. Alright, enough with the schmaltz. During the last challenge, CT was called in as a “surprise guest” to battle someone they call “Johnny Bananas.” The clip below might be the greatest moment in reality television history. Not only did he embarrass him but he . . . actually — just watch it. I don’t want to spoil anything. Let’s just say CT’s new nickname may be The Terminator.