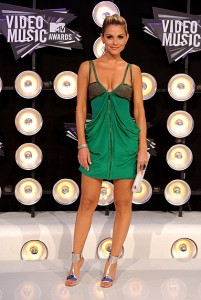 There are days where I fantasize about how much easier my life might be if I looked like Maria Menounos. Then I remind myself of my fantastic personality and amazing breasts, and I squash my pity-party. And speaking of personality — why is it that Maria Menounos is hired to interview the cast of MTV’s ‘The Challenge: Rivals’ and can’t be bothered to ask the most important questions? I realize the show is about physical challenges, but some of those physical challenges include sex, and I’d like to know which cast members are still having it — with each other. The only relevant question she asked involved Jenn Grijalva and Adam King, and after watching Jenn huff-and-puff over nothing (no pun intended), I still have absolutely no idea whether she and Adam had sex in the back of a bus. I blame Maria for that. And what about Chris “CT” Tamburello and Laurel Stucky? Since CT is so beautiful he hurts my eyes, imagine my disappointment when Maria failed to confirm his single status. I suppose that’s neither here nor there since CT and I have a date on a deserted island somewhere where he’ll go out into the ocean and catch me fish with his bare hands. A girl can dream, can’t she? And finally, are Wes Bergmann and Mandy Moyer still friends-with-benefits? What exactly did Maria think she was paid to ask during this interview? Perhaps she needs to watch more of those Real Housewives reunions and take some notes from the great Andy Cohen.

UPDATE: It’s been brought to my attention by a very kind commenter that Maria did in fact ask the correct questions but the douchey editor over at MTV decided to edit those out. For details on what really happened, and the answers to the questions I posed above, read Adam King’s blog. You’ll be relieved to know that CT is still available — for me. And my major apologies to Maria for insulting her interviewing skills.