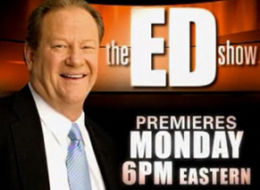 Ed Schultz got himself in hot water for calling author Laura Ingraham a “right wing slut” after Ingraham attacked President Obama for drinking Guiness in Ireland on an official visit. Ingraham predictably jibed back, calling Schultz a misogynist, which ultimately forced Schultz to apologize for his “vile and inappropriate language.” For those who have forgotten, Laura Ingraham is the same asshole who called Meghan McCain a “useful idiot,” and later attacked her weight, calling her a “plus-sized model.” At the time, McCain took the high road, saying, “To all the curvy girls out there, don’t let anyone make you feel bad about your body. I love my curves and you should love yours too.” So in case Laura Ingraham is listening — you don’t get to arbitrarily attack another woman and then scream “misogyny” when someone attacks you. When you’re a jerk, I’m fine with just about any offensive term being thrown in your direction. That includes “slut.”