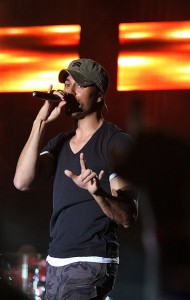 Rumors are circulating that Enrique Iglesias bailed on Britney Spears’ upcoming tour because he was upset over money and billing. Apparently, he wanted a larger percentage of the ticket sales, and he felt that the tour was promoted as if Enrique was opening for Britney, instead of co-headlining with her. If this is true, then he should have a long talk with his team, because there’s no excuse for bailing on a tour this late in the game over a contract dispute. I highly doubt Britney would have announced the tour on Good Morning America unless the deal was closed. So did Enrique want to renegotiate his deal after hearing the public’s reaction to the announcement? I’m not sure. His people have since stated that he simply “didn’t need the tour,” as he’s “already on a sold out tour.” Yeah — sure that’s true. That’s why he started negotiating this in the first place. All I know for sure is that this is extremely sloppy, and either Enrique or his representatives need to be more professional. You don’t have your co-headliner announce a tour at one of the biggest shows in the United States, only to subsequently bail. It makes everyone look bad.

Nothing saddens me more than when a talented person conforms to their deficit.  Translation?  I don’t like a sell-out, especially when its unnecessary.  That brings me to Enrique Iglesias, who can actually sing, but you would never know that if you listened to his current single.  It’s so abominable that I found myself yelling out loud when I heard it.  “Enrique, are you serious!?,” I said, hoping he was listening outside my door.  I seriously wonder whether he got this overly produced track from Britney Spears’ rejected pile of music.  I know he has to put food on the table, and I know the current state of music is horrible, but this is unforgivable.  I’ve posted his current video below, and I’ve also posted one of his best, older songs, called Experiencia Religiosa.  After listening to the second song, I hope you’ll join me in my outrage.