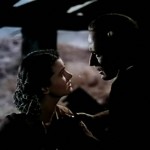 Actors are constantly whining about how uncomfortable sex scenes are, and interviewers always scoff at the claim. Actors insist that no one wants to fool around with a total stranger while the crew stands around eating sandwiches.   Since so many actors end up dating their co-stars, I often wonder if this claim is an urban legend that keeps getting perpetuated. Denise Richards might have revealed the real reason behind the discomfort while promoting her new show, Blue Mountain State, on Howard Stern today. Richards told Stern that a scene in the show required her to place her hand on her co-star’s penis, and she insisted that he wasn’t erect. When Stern accused him of being gay, Richards explained that he likely didn’t get erect because his girlfriend was standing on set, watching the scene. Michelle Pfeiffer said the same, joking that she often waves to the girlfriend while engaging in sex scenes with a man. If I were an actor on set, I’d be mighty angry if my co-star’s significant other showed up to watch me like a hawk. They should be banned from the set.