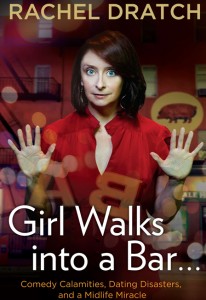 I like self-deprecating humor just as much as the next person, but even The Dishmaster has a boiling point. Former Saturday Night Live performer Rachel Dratch is promoting her new book, which involves endless confessions about how by “Hollywood standards” she’s considered a “troll, ogre, woodland creature or manly lesbian.” She also recounts how Tina Fey replaced her character on 30 Rock, and how the media subsequently speculated that Dratch wasn’t attractive enough for the part. I’ve had it with Rachel Dratch. I realize that controversy sells books, but there comes a point where self-deprecating humor just becomes sad. She’s not ugly, and I’m sick of hearing her proclaim otherwise — even if it’s a joke.