Skip to content
You gotta love Rebel Wilson. Unlike most female comedians today, she doesn’t rely on male-oriented comedy to succeed. She’s original, likable, and hilarious. Watch her heart-warming story about the time she met Russell Crowe, and he told her to “fu*k off.” 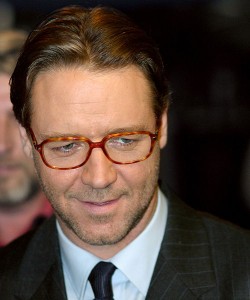 Russell Crowe received a lot of criticism over his anti-circumcision tweets, and some are even calling his statements anti-semitic. Of the “barbaric” ritual, Crowe said, “I love my Jewish friends, I love the apples and the honey and the funny little hats, but stop cutting your babies.” I’m not sure whether his stance on baby penis is the anti-semitic part or it’s the “little hats” remark. As a Jew, I tried hard to be offended by his comments, especially since us Jews take just about everything personally. No such luck though. I suppose the only thing that offended me is the idea that Russell Crowe didn’t ask women what they prefer, because that’s certainly the most important part of this equation. Crowe forgets that later in life, men are less concerned about the existence or non-existence of foreskin, and they are more concerned about getting laid. And if women had their choice, I think I know which they’d pick. Perhaps that’s just me though. Did I mention I’m a Jew?
Everyone remembers Christian Bale’s on-set rant, but no one noticed that he was yelling with an American accent.  Bale was born in Wales, and he has an English accent.  At the time of his infamous tirade, he was playing a character with an American accent, and he apparently never breaks character while filming a movie.  I applaud his dedication, but isn’t this a little strange?  The man was furious — so you would think he would break character and slip back into his natural accent.  I’ve posted both his tirade and his apology below.  Although he seems pretty charming during his apology, I don’t think it cleaned up the public mess he created.  Most people still thinks he’s pretty nuts, so unless he sits down with Barbara Walters, I imagine he and Russell Crowe will soon have a lot in common.  Listen below and notice the accents.

Russell Crowe is back to his old tricks. In an interview to promote ‘Robin Hood,’ Crowe angrily walked-out  after the interviewer suggested that his accent in the film sounded Irish instead of the intended Northern English accent. Apparently, this isn’t the first time someone has suggested that, and Crowe became irate. Shocker.  You would think that Russell Crowe would have undergone some serious anger management counseling after the phone throwing incident almost ruined his career.  Listen to the interview below.