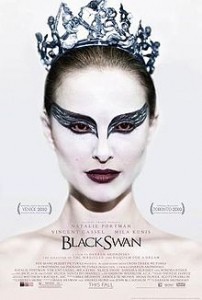 Even though It’s gutsy when the lone wolf stands up to the big bad Hollywood studio, it’s also career suicide.  Sarah Lane is making the interview rounds to discuss just how much work she did as Natalie Portman’s body double in Black Swan.  Lane says Natalie Portman did only 5% of the work, contrary to the 85% claimed by  Benjamin Millipied, Natalie’s choreographer and fiance.  She claims she wants to clear this up, not because she’s jealous of Natalie’s success, but because she thinks it’s an insult to dancers everywhere to suggest that someone could become a professional ballet dancer in only a year.  She’s also unhappy that she’s not even credited as Portman’s body double, having only been mentioned at the very end of the credits as a “Lady in the Lane.”  Nothing pleases me more than defending the little guy, but I’ll make an exception this time around.  First, it’s really none of Lane’s business how Fox Searchlight Pictures (the movie studio) wishes to portray Natalie Portman’s dancing ability.  If they want to stretch the truth to make their movie sell, then so be it.  Sarah Lane was paid for her work, and that’s all she’s entitled to.  Furthermore, if she wanted to be credited as Natalie Portman’s body double, then she should have a long talk with her agent that negotiated the deal.  These things are worked out in advance, and it’s therefore not the studio’s fault for billing her as a “Lady in the Lane” —  it’s her agent’s fault.  And lastly, as previously mentioned, this is career suicide.  Do you think a major movie studio is going to hire Sarah Lane again after she exposed information they didn’t want released?  Probably not.  When you have a job, do your job, keep your mouth shut, and get out.  Let this be a lesson.