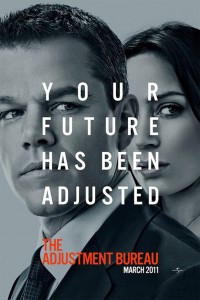 I refuse to spend an entire movie wondering what’s motivating the characters’ behavior. In Adjustment Bureau, there’s a team of people with fashionable hats and trench coats trying to keep Matt Damon from the girl he loves (Emily Blunt), and for what feels like an eternity — we don’t know why. When he asks, he’s only told that his wishes “deviate from the plan.” So what is this “plan,” and who are these guys, and why do they care who Matt Damon sleeps with — or loves for that matter? This is the part of the review where I usually tell my reader to watch the movie for fear of spoiling it, but I’m afraid the movie provides little answers. The script is basically a poor man’s play on free will, only it makes zero sense because it’s not your “plan” if everyone is deliberately putting obstacles in your way. To clarify, allow me to use a specific example. If it’s my destiny to be a stripper, and every time I’m about to enter the stage to perform I’m met with five guys who block the stage, does it really make sense to justify that behavior with “it’s not part of the plan?” It’s is my plan to be a stripper, but you clowns with stupid hats ruined it!! If my analogy didn’t make sense, I’d encourage you to avoid the film, because their explanation is far worse than my example. In addition to the terrible writing, the movie is filled with extremely boring chase sequences, which involve Matt Damon tracking down Emily Blunt while simultaneously trying to avoid a lobotomy (no, I’m not kidding). I’d first like to note that if I personally had to choose between love and a lobotomy — I’d keep my brain in tact. But that’s just me. Second — if you’re going to write a terrible film, can you at least provide me with some special effects? This is a big budget movie, so at least throw in some Mission Impossible gadgetry to keep my attention. OVERALL RATING: DISHSATISFIED