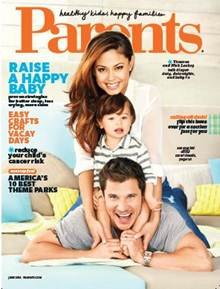 Nick Lachey and Vanessa Minnillo Covered the June Issue of Parents Magazine and discussed how they met, their son, and how they steal alone time for each other. Read some choice quotes below.

On how the couple got together:

“Nick asked me to be in his What’s Left of Me music video [in 2006] and that’s when we started talking more. Apparently Nick had wardrobe approval, because I was wearing this little dress that was actually a shirt.” (V)

Nick on the aforementioned shirt:

On being together five years before getting married and pregnant:

“It was fun to have the honeymoon phase before bringing the little guy in.” (V)

On starting to talk about kids in detail:

As we started getting serious [about having kids], we’d ask each other things like ‘What kind of parent would you be?’ Then when I was pregnant, we really talked. ‘How would we teach him right from wrong? How would we raise him with values?’ At that point it wasn’t hypothetical – it was happening whether we were ready or not!’ (V)

On Vanessa as a mother:

“My wife’s maternal side is a new dynamic to her personality – and it’s definitely made her even sexier.” (N)

On Nick as a father:

“I knew the man I was going to marry was not only a great man, a good friend, and a family guy, but he was going to respect and treat me well and be an amazing father and role model to our children. That’s Nick.” (V)

On their bi-coastal lifestyle:

“Nick made the sacrifice of waiting until my show wrapped to do his show, and I’m not taking opportunities in L.A. during my show’s hiatus. We are a family first, and that means both of us raising Cam together.” (V)

On looking forward to 7:30pm every night, when Camden goes to bed:

“We put on some music or a favorite TV show, pour a glass of wine, have dinner – that’s our ‘alone time’. That’s why it was so important to us to establish Camden’s sleep schedule right out of the gate. I had six different moms telling me ‘Get him on a routine; you will thank yourself later.” (V)

On advice from her friends not to let baby sneak into bed:

“When you’ve got the little one between you, it’s not as romantic as when the two of you are alone.” (V)

On being conscious of their fame with social media:

“As a parent, it can be exciting to share photos of your child on social media, but we try to keep in mind that things can be picked up by the press. What’s being a proud parent and what is sharing too much? You can drive yourself crazy thinking about it!” (V)

On what’s next for the Lachey family:

“We definitely want more kids. You don’t want kids to have to share the game group of friends.” (N) “But you don’t want them so far apart that they have nothing in common.” (V)“Yes, they have to be close enough in age so they can still relate to each other.” (N)

On Nick recording an album for each child:

“Since Nick did A Father’s Lullaby for Camden, we joke that if he doesn’t do one for each of the kids they’re going to think Camden is Daddy’s favorite!” (V)

On a permanent move down the road:

“I was an Air Force brat and I loved it. But I went to eight different schools my first nine years of schooling, so I would love to have Camden grow up the way Nick did, in one place, surrounded by family and friends.” (V)

On finding what works for them:

“We’re learning together and figuring it out along the way. At least we think we’ve figured it out. I guess we’ll find out down the line if we screwed up or not!” (N) 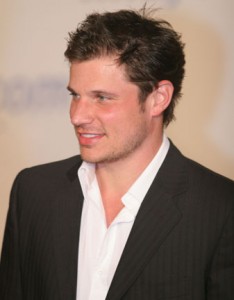 What’s that saying? — “Fool me once, shame on you, fool me twice, shame on me.” When Nick Lachey and Jessica Simpson divorced, Lachey told Rolling Stone that the thought of cameras in his life now fills him “with a homicidal rage,” and he just “wants to push [the cameramen] down the fucking stairs.” That quote was in the context of his marriage ending, and the idea that he partly blamed his MTV show, ‘Newlyweds,’ for its demise. Years later, it appears he’s gotten over it. He and Vanessa Minnillo have decided to televise their wedding for a TLC special, and I can’t help but wonder if Nick Lachey will learn the same lesson twice.