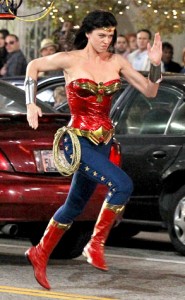 Did the guys behind Wonder Woman return to the same costume designer to redo the original monstrosity? Isn’t that like getting a bad haircut and returning to the same hair dresser to fix it? This is my guess after viewing the changed Wonder Woman costume. Apparently, I was not the only blogger to notice that Adrianne Palicki’s costume looked like a poor man’s Halloween get-up. Unfortunately, the revamped costume upgraded Wonder Woman from Party City to the WWE. To put it simply, it still looks cheap. Can’t they get an expensive fabric instead of this shiny lycra mess? I don’t get it. Plus, Palicki’s breasts look like they might fall out of that top.  Perhaps they should hire me instead.  I’m pretty sure I wouldn’t have the same problem.

Anyone who knows me can reveal that I’m slightly sexist. So the thought of a female superhero beating up bad guys is slightly off-putting to begin with, but giving that female superhero a slutty outfit solidifies my skepticism. I understand that the designers for Adrianne Palicki’s Wonder Woman ensemble likely wanted something closely aligned with Lynda Carter’s original costume, but much time has passed since Carter’s role, which begs for something a little more current. The costume looks like a cheap latex get-up that I’d get at Party City when I’m strapped for a last minute Halloween costume, and I want an excuse to show of my often disguised gigantic boobies.