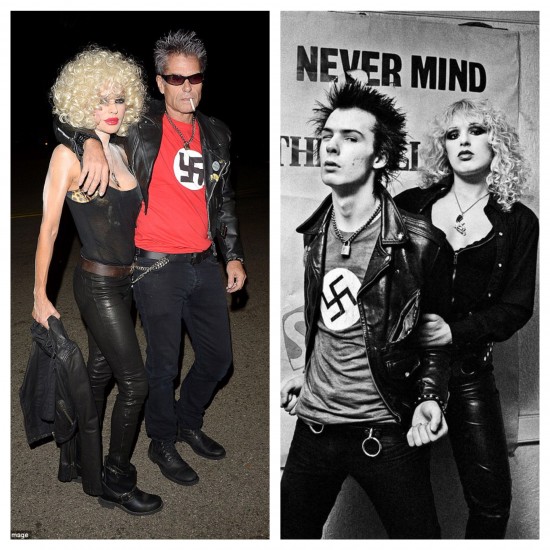 Though I’m the first to pounce on our politically correct society, I’ll also espouse my outrage as I see fit, and Harry Hamlin’s Halloween costume deserves The Dishmaster’s wrath. The star stepped out as notorious Sex Pistols star Sid Vicious, with his wife, Lisa Rinna, posed as Nancy (the wife Vicious allegedly murdered before later dying of a heroine overdose).  The duo jointly apologized with a standard, “I didn’t intend to hurt anyone,” and there’s remaining debate about whether it’s actually offensive to don a sign of the Holocaust in an effort to be authentic. After all, Sid wore a swastika, so Harry simply had no choice. But if Prince Harry couldn’t get away with it, this Harry certainly can’t.

There’s a larger, shockingly obvious reason that Harry Hamlin’s costume causes controversy, and it’s sad I’ll have to map it out, since you’d think adults would act as such. There’s no humor associated with a symbol that represents one of the most painful times in our history. Yes someone else wore it and it’s simply a costume, but that doesn’t make it right. I realize Hamlin doesn’t advocate it’s intention, but that’s irrelevant. Wearing such a wretched image also keeps it in our consciousness, decensitizing society to its horror. I’d say the same about the use of the N word (in any context, no matter who speaks it) and to the use of black face. We should know better. And lastly, I am Jewish. That either makes me a biased observer or uniquely qualified to comment. You decide.

Anyone who knows me can reveal that I’m slightly sexist. So the thought of a female superhero beating up bad guys is slightly off-putting to begin with, but giving that female superhero a slutty outfit solidifies my skepticism. I understand that the designers for Adrianne Palicki’s Wonder Woman ensemble likely wanted something closely aligned with Lynda Carter’s original costume, but much time has passed since Carter’s role, which begs for something a little more current. The costume looks like a cheap latex get-up that I’d get at Party City when I’m strapped for a last minute Halloween costume, and I want an excuse to show of my often disguised gigantic boobies.
I must confess that I really like Heidi Klum. She’s completely ridiculous on Project Runway with her faux-serious statements, such as, “one day you’re in, and one day you’re out,” but every so often you’ll catch her real personality, and she’s very funny. During a Project Runway reunion, Heidi once turned to Tim Gunn after a designer barely answered her question, and she said, “she’s a little weird, no?”  She also turned to the judges during one of their deliberations and couldn’t resist gossiping about a designer, saying, “why does she always look so angry on the runway?” She followed that up with a very funny imitation of the designer’s angry-face. So it doesn’t surprise me that Heidi loves to dress up for Halloween, given her sense of humor. I’ve attached some of her costumes below, and the first picture is from this year. Apparently, Seal didn’t want to wear stilts, so he opted for a wider frame instead. Enjoy!