Skip to content
Tim Gunn’s tour of taking down fashion failures took a new turn to the Kardashian Klan, who the ‘Project Runway’ host feels perpetuate an “aura of yuck.” He objects to their “distasteful” style picks, which I can only guess includes excessive body-con dresses, followed by over-the-top accentuating of their gigantic, plumped up asses.Gunn goes on to suggest that with all their resources, it’s bad to suggest that “you too can dress this way.” Watch the very funny video below. 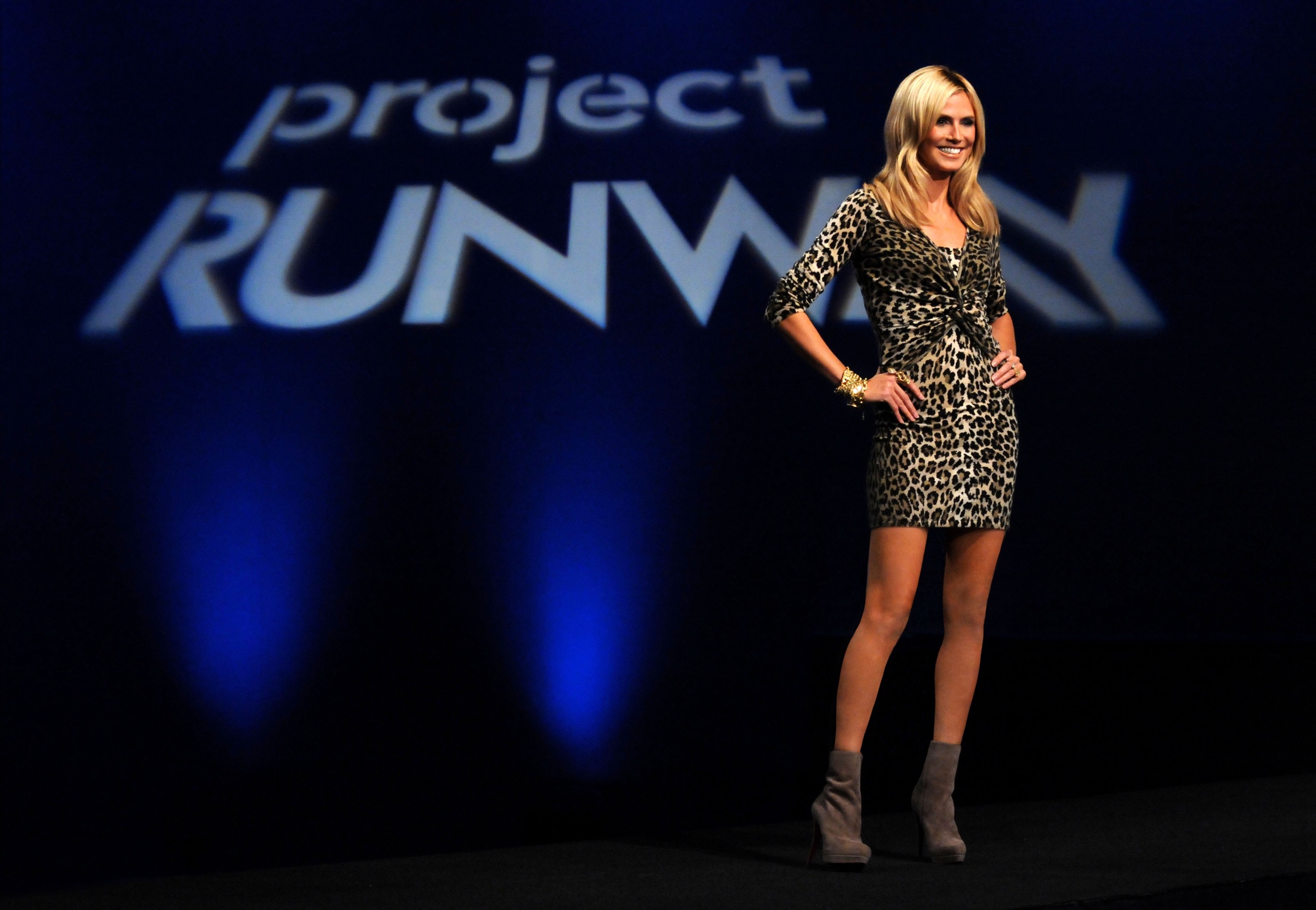 “I’m telling you — and I haven’t said this very much — I hated season 14,” Tim Gunn tells EW. “I hated it. I felt that other than a couple of designers, they weren’t working up to their potential. The whole thing was lackluster . . . . I have a theory about it, which is that they just weren’t hungry.. Their audition videos from home, you know, they’re sitting by a pool, they’re taking us into their closet with all their designer clothes, and I just thought, they’re not hungry! Most of them. And I think that was largely the issue. I wasn’t at the auditions [this] season for the first time ever, and I blame myself, because I wouldn’t have put up with a lot of it.” Tim Gunn, on his disappointment with the most recent season of Project Runway contestants.
Kathy Griffin has always  insisted she picks on people that have it coming, and she certainly doesn’t kick em’ when they’re down. That philosophy, along with her non-joke-telling comedic format made me question her place on Fashion Police from the start. The show warrants short sound bites and old-school joke telling, which is a dead art among many of today’s top comics. In fact, Joan Rivers might have been the last of that breed. And when you’re behind-the-scenes writers are providing material for a NON-comic that can’t self-edit, you’re left with the Guiliana Rancic/Zendaya mess. In defense of Guiliana, the “You’re not Joan Rivers” comments are unwarranted, mostly because Joan herself was often embroiled in similar drama. The difference of course, is that Joan had a built in, very large fan base that was always willing to forget or forgive, and Guiliana doesn’t. If I produced this show, I’d sack the writers and refresh the format with a classic left-of-center choice like Gilbert Gottfried and then fight like hell for Tim Gunn. Read Griffin’s official statement below.

For twelve season’s, it’s been consistently clear that Tim Gunn is the star of Project Runway. Until now, the show has minimized its most-important player. Sure he appears in the workroom, but his coveted critiques are edited down to a short screen time, leaving the viewers always wanting more. This season, things changed. Gunn now gets to “save” an ousted designer when he disagrees with the judges. It’s brilliant — and its shocking it didn’t happen sooner. As for the season’s other changes, the jury’s out on the post-runway garment talk, but one thing’s for sure. Zac Posen must go. Yes he’s talented, but he’s extremely difficult to watch. He seems like a self-important prick with no personality. He lacks Michael Kors’ sense of humor, and he has zero chemistry with Klum, whose personality is so far on the other end of the likability spectrum I naturally assume tension between the two. And last but not least, I’m completely aghast at this season’s contenders. They all seem mentally unstable, making this more of a clown contest than a designer showcase. If they’re choosing the best in the country, can’t they find talent and normalcy?
I have a very fashionable gay friend who insists that a woman should never wear flats — under any circumstances. The revelation was devastating, and I think of his disapproval every time I slip on my very comfortable ballet flats around the office. As it turns out, my friend is wrong. According to Tim Gunn, certain styles and circumstances allow for the more comfortable alternative. Watch below.
When guest judges appear on Project Runway, I question their credentials, especially when those guest judges are actors and not fashion designers. So when I saw Zoe Saldana, I was immediately skeptical. Surprisingly, she was better than the regular judges, who, to quote Tim Gunn, often seem to be “smoking crack.” Watch her criticism below.

You have to admire the chutzpah of Tim Gunn.  The man has no fear, and the vintage interview below is no exception.  Joy Behar asked him what he thought of the Kardashian “look,” and he said that their style is “vulgar, cheap, and tawdry.”  When Behar said they are “sweet girls,” and they have appeared on her show, Gunn asked how they were dressed.  Behar said Kim looked pretty and Tim said, “she’s pretty but she’s a poser.  As soon as she moves it’s all over.”  I’m not sure what he means exactly, but it sounds pretty funny.  Does he mean that her ass is so large, he becomes distracted when she begins to walk?  I’m not sure, but I love Tim Gunn more and more every day.

If you watched the Project Runway finale, you might have noticed, as Tim Gunn says, the judges were “smoking crack.”  Nine Garcia and Michael Kors chose the wrong winner, despite Heidi Klum’s protests.  As part of their deliberation, Garcia and Kors accused Mondo’s clothing of being “unwearable,” and Heidi insisted that she would wear the polka dot dress.  Michael Kors then told Heidi that Mondo didn’t listen to his suggestion by “cutting off the sleeves” to avoid the model looking like a “polka dot sausage.”  At the time I heard this, I thought Michael Kors was out of his mind.  The dress was incredible, and Heidi kept her word by wearing it to an event.  The problem?  She cut the sleeves off!! Did Michael Kors successfully bully her twice?  I realize that Mondo must adhere to Heidi’s request, but  this ruined the dress.  Look at the two pictures below, and tell me if you agree.

I have never been so stunned by a Project Runway decision in my the eight seasons of the show.  Weeks ago, when I saw Gretchen’s collection, I assumed she was actually a decoy, and I was shocked to discover she made it to the finale.  Then, after watching the final show, and seeing the originality of Mondo Guerra’s collection, I figured it would be a very easy choice.  Instead, the four judges (including Jessica Simpson) were divided down the middle, and Nina Garcia and Michael Kors somehow bullied Heidi Klum and Jessica Simpson into picking Gretchen.  Jessica Simpson surprised me most, because she had the simplest, yet most poignant critique of Gretchen’s collection, saying, “everything looks loose,” and later responding to Nina Garcia and Michael Kors’ excessive rambling by simply saying, “I’m still going with Mondo.”  Michael Kors and Nina Garcia picked Gretchen because “she’s what’s happening now in fashion,” despite Heidi’s insistence that this is a high fashion show, and it shouldn’t be about what’s most “wearable.”  I imagine that Michael Kors picked the “ready-to-wear” collection, because that’s most aligned with his own aesthetic, given that Michael Kors doesn’t specialize in high-fashion.  I’m pissed.  I’m pissed that I continued to waste my time watching this season even though the judges made terrible decisions every episode.  I’m also pissed that my favorite part of the show was watching Tim Gunn’s facebook video blogs, and Tim Gunn stopped recording the blogs after “hurting a Producer from Lifetime.”  And finally, I’m pissed because Mondo deserved to win the finale, and I hate to see someone robbed of their title.

UPDATE: Apparently, Tim Gunn agrees with me. Watch the video below.

I must confess that I really like Heidi Klum. She’s completely ridiculous on Project Runway with her faux-serious statements, such as, “one day you’re in, and one day you’re out,” but every so often you’ll catch her real personality, and she’s very funny. During a Project Runway reunion, Heidi once turned to Tim Gunn after a designer barely answered her question, and she said, “she’s a little weird, no?”  She also turned to the judges during one of their deliberations and couldn’t resist gossiping about a designer, saying, “why does she always look so angry on the runway?” She followed that up with a very funny imitation of the designer’s angry-face. So it doesn’t surprise me that Heidi loves to dress up for Halloween, given her sense of humor. I’ve attached some of her costumes below, and the first picture is from this year. Apparently, Seal didn’t want to wear stilts, so he opted for a wider frame instead. Enjoy!