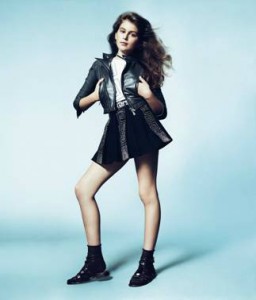 Cindy Crawford rightfully decided not to whore-out her ten year old daughter to the fashion world. Though her daughter recently modeled Versace’s children’s line, Crawford said, “At this point, she’s too young to pursue a career. There aren’t even a handful of jobs for a 10-year-old girl.” This is good news. I was actually pretty disgusted by the photos from the Versace line, because no one wants to see a sexualized 10 year old. Perhaps Crawford should have a conversation with Kris Jenner.

I have a very fashionable gay friend who insists that a woman should never wear flats — under any circumstances. The revelation was devastating, and I think of his disapproval every time I slip on my very comfortable ballet flats around the office. As it turns out, my friend is wrong. According to Tim Gunn, certain styles and circumstances allow for the more comfortable alternative. Watch below.
There’s narcissism — and then there’s narcissism.  Though Karl Legerfeld is an unequivocal fashion genius, only an ego-maniac would interview himself. I realize that this is simply an idea gone wrong, rather than a representation of his character, but  let this be a lesson to everyone. Only Alec Baldwin could pull off the idea below. Watch and enjoy.
“I can’t walk in this f-cking dress! This is Victoria Beckham, and so you know, it’s a size negative four. I can’t breathe. I think the zipper is about to go swoosh!” The very funny Eva Longoria discussing the perils of fashion at an event honoring photographer Randall Slavin. 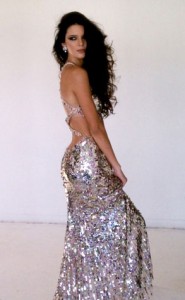 You might recall a time in history when models didn’t look like little boys. Remember Cindy Crawford, and how she actually had those things that make up a woman — breasts and ass? And just when you thought it could not get worse, we’ve officially transitioned to a pre-pubescent stage. I understand that Kendall Jenner is of the Kardashian Posse and is therefore in demand, but that’s no excuse. She’s just too young — and it’s disturbing. I suppose this is the fashion industry’s alternative to anorexia. Why bother with hungry models when you can use children that haven’t full developed yet. It’s genius!

Whenever it hits the press that a well-known, rich celebrity is a bigot, I’m immediately suspicious of every single person that has ever worked with the bigot.  John Galliano, the chief designer for Christian Dior, was recently caught on tape spewing an anti-semitic rant, and it’s safe to say his career is now over.  But what about the career of everyone at Christian Dior who continued to employ Galliano for years?  Should they be held accountable?  Did they know about this?  I’m have no idea if they knew, but how could they not?  Bigots are not very good at hiding their hatred, so it shouldn’t take long to figure it out.  Dior suspended Galliano, but it’s convenient timing.  Once the public got wind of the story, there was no other choice.

Kendall Jenner, one of the many Kardashian sisters in the entertainment industry, models clothing, and she’s only fourteen years old.  Kris Jenner seems to think it’s fine, probably because she’s a “momager” that pockets ten percent of the proceeds.  But should prepubescent girls be modeling clothing?  It’s certainly an alternative to having anorexic adults do it.  And since the fashion industry is getting pressured to employ bigger models, they decided to employ toddlers instead.  Maybe I missed the opportunity to be on the cover of a magazine at the tender age of ten.  After all, my legs were pretty thin then.  Poor Kendall — it’s all downhill from here.