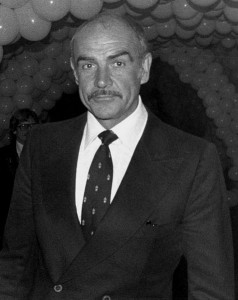 Much of the outrage about Mel Gibson surrounds whether he actually punched his girlfriend in the face, knocking out two of her teeth. But then how did Sean Connery get off scot-free (no pun intended)? In an interview with Barbara Walters, Sean Connery admitted to occasionally hitting his wife — when the situation “merited it,” of course. He said that women often relentlessly try to get the last word, and it “depends entirely on the circumstances” whether they deserve a good slap in the face. Come to think of it, I often fantasize about returning to the good old days, where I could maybe say to a condescending boss or two, “why don’t we just take this outside.” That way I could conserve all of my overflowing wit for theDishmaster.com instead. But not everyone is a Taekwondo master, and so it’s probably best that office fisticuffs are prohibited. Seriously though, if you didn’t know that Sean Connery is a wife-beater, watch the interview below. It’s mind-blowing.