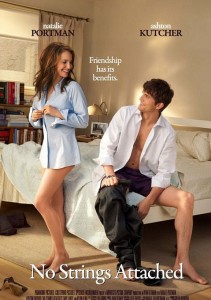 It’s called a romantic comedy for a reason.  If the two main characters don’t get together in the end, then it’s not a comedy.  And if you use My Best Friend’s Wedding as an example I might throw something.  Sure that film was “unpredictable,” but it was also horrible.   Furthermore, I don’t pay good money to walk into a theater expecting a laugh, and leave the theater crying because the lead actress got hit by a bus.  So what inspired this hateful tirade?  Well, I saw the film No Strings Attached, which was surprisingly mediocre.  I use the term surprising, because I expected it to be terrible, and left feeling pleasantly complacent.  In Dishmaster land, complacent is equivalent to cheerful bliss.  After I left, I read the reviews, and I kept seeing the word “predictable.”  What exactly were the critics expecting?  There were certainly issues with the movie, but predicting the ending was not one of them.