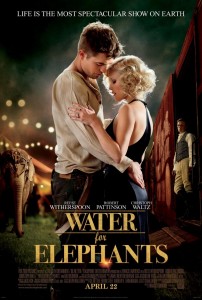 There are times when I have absolutely no constructive criticism for a movie gone awry. This is one of those cases. To put it simply, the movie is boring. Jacob Jankowski plays a veterinary school student whose final exam is interrupted by the news of his parents death. Lost and sad, he randomly boards a train out of town. As it turns out, he hopped a circus train, and he swings a job shoveling manure for the circus until the head trainer, August (Christoph Waltz), promotes him to be the veterinarian. While tending to the animals, he sees Marlena (Reese Witherspoon) and immediately falls in love. Marlena returns his affection, but since she’s married to August, and August is a tyrant, they can’t be together. That’s the story in a nutshell. I couldn’t figure out if this movie was supposed to focus on the circus or the love story. If it was meant to focus on the circus, then it’s done poorly. There’s not nearly enough content about the show itself to stay engaged or entertained. Sure, it’s interesting to see someone acting like a soulless prick while trying to keep a business afloat, but there has to be more than that to keep a film afloat. And if the film is meant to be a love story, I’d recommend that the director take a day watching and re-watching The Notebook, because this feels like a poor man’s version of that. Additionally, Rob Pattinson and Reese Witherspoon have zero chemistry.
OVERALL RATING: DISHSATISFIED