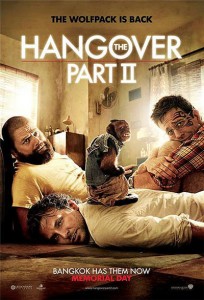 When a movie is good, you might as well make it twice, right? There’s a lot of negative film reviews out there for this sequel, and I can’t help but think those film critics missed the genius of duplicating a format.  After all, isn’t that why we remake old classics?  The Hangover writers are just ahead of their time. They re-made a movie within two years of its original release — and if you liked the first one — then you’ll like the second one. There’s no need to summarize the plot for this review, other than to say that Stu is getting married again — and this time it’s in Thailand.  The subsequent hilarity is much like the first film, but with different jokes.  Oh yeah — it’s slightly grosser.  Go see it. I promise you’ll laugh. OVERALL RATING: DISHTASTIC