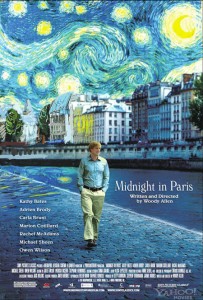 Some film critics say that “Woody Allen is back” with this film. Personally, I’m not sure he ever left. His personal life has always tainted public opinion of his films, so the man has to remind the world of his continued brilliance. And this film is certainly brilliant. It’s one of the best movies I’ve seen in a long time — and the most unique. The movie follows Gil Pender (Owen Wilson) and Inez (Rachel McAdams), as they travel with Inez’s family to Paris for business. Gil is a successful screenwriter who wants to change careers and write a novel, and Inez is an unsupportive fiance that I wished to kill for most of the film. No one can write a couple quite like Woody Allen. Their bickering is incredibly realistic, and I even found myself with some slight post traumatic stress from my previous relationship. Gil is a romantic, and he wishes he lived in Paris in the 20’s. As he’s walking home from a painful dinner with Inez’s family, he gets in a car with some strangers and finds himself transported to the 20’s. While there, he meets some famous literary and artistic icons, whose names I will keep a secret so that you can partake in the same very enjoyable guessing game. Let’s just say Adrian Brody was my favorite. Gil’s experience with these characters not only helps his novel, but it also helps him appreciate the present. Only Woody Allen can write a romantic film that doesn’t involve a man running for an airplane before the love of his life leaves him forever. Some stories are simple — and beautiful. OVERALL RATING: DISHTASTIC