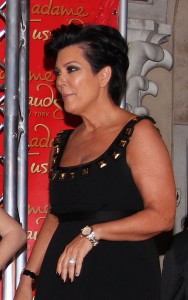 I love mindless television, and I love to point my finger and laugh at the superficial madness of Los Angeles. Having said that, I’ve had enough of the Kardashians. Kris Jenner has officially put me over the edge. On the new season of Keeping up With the Kardashians, she decides to get a face-lift in preparation for Kim’s wedding. So what’s my issues? It’s ridiculous! First, she doesn’t need one. Second, when you look at her old face, it actually has character, which is more than I can say for her new face. Furthermore, I’m fundamentally against all plastic surgery. That proclamation quite obviously excludes getting the fat sucked out of one’s neck — because that’s clearly necessary. Other than the double-chin-fat-suckage, I declare that all human beings look better with age. It’s better than looking like a plastic alien.