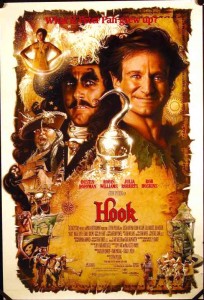 Julia Roberts is one of those untouchable celebrities who manages to keep a pristine reputation despite a history of questionable behavior. But here at The Dishmaster, it’s always fun to remind my readers of celebrity feuds amongst Hollywood titans. One such feud happened in 1991 on the set of Steven Spielberg’s ‘Hook.’ Rumors circulated during filming that Roberts was extremely difficult to work with, and she soon developed the clever nickname “Tinkerhell”. When Spielberg was asked about the rumors during a ’60 Minutes’ interview, he slyly said, “It was an unfortunate time for us to work together.” The “difficult time” in question was Roberts’ decision to leave Kiefer Sutherland just three days before their wedding date, a choice that the press deemed to be related to some kind of a “nervous breakdown.” When Roberts got wind of Spielberg’s comment, she wasn’t pleased. She told Vanity Fair, “I saw that [interview] and my eyes popped out of my head. I couldn’t believe that this person that I knew and trusted was actually hesitating to come to my defense. It was the first time that I felt I had a turncoat in my midst.” But Spielberg didn’t back down. His representative issued a statement in response, saying, “It was just a tough time in her life. Fortunately, she went on to great success, and so did Steven.”