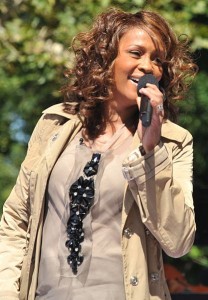 I am absolutely disgusted by the way the media has treated Whitney Houston’s death, and I’m even more disgusted that the people in her inner circle agreed to televise her funeral. I was equally disturbed when Michael Jackson’s grieving children had to mourn their father’s death while simultaneously speaking in front of the entire world. Have we lost our humanity? Whitney Houston left her daughter behind, and this poor child is being pummeled with media inquiries. I don’t want to hear anything about Bobbi Kristina until Bobbi Kristina is ready to talk. Until then, let the child grieve, and keep the media out of that process. A funeral is for family. If the public wants a part of it they can remember her by listening to her records in the privacy of their home.