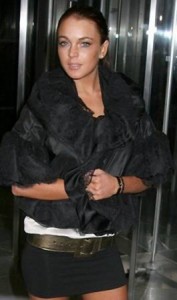 I feel horrible for Lindsay Lohan. It’s bad enough she’s got two parents who crave media attention, but then she also has the media publishing their leaks. The latest debacle happened when Lindsay called her father to ask for help in the midst of a fight with her mother, who she claims erupted when Lindsay asked her mother to return the $40,000 she gave her to rescue her from foreclosure. Her father; however, claims her mother lied to get the money. Somehow, the recorded conversation ended up on TMZ (likely from her father handing it over), who will probably rot in hell for publishing it. I think it’s time for everyone in the media to leave this poor girl alone. I won’t link to TMZ on this one, and I won’t share the recorded conversation. I realize that reporting on this is infringing on my requested moratorium, but how do you make a request without requesting? It’s quite the conundrum.