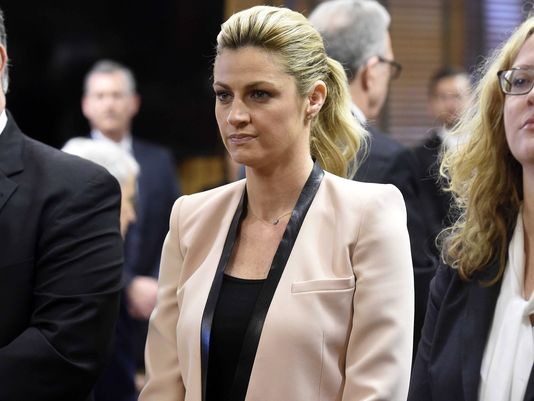 The next time you see naked images of A-listers are on the internet, think of Erin Andrews, who was just awarded $55 million in damages for a secret 2008 recording of the naked Sportscaster that was filmed at the Nashville Marriott by a peeping tom. And if that first sentence sparks your curiosity enough to actually google the video, think of Marriott Executive Neal Peskind, and how the invasive internet ironically worked in Andrews’ favor during trial, when a bartender allegedly witnessed the franchise owner of the Vanderbilt Marriott Hotel that Erin sued actually watching the video with pals at dinner while complaining about the cost of the trial. Perhaps a $55 million judgment will make him and everyone else think a little more seriously about the implications of such an offense. Andrews alleged that the Marriott revealed her room number to her stalker, and then booked him in the room beside her upon his request, which allowed for him to film her naked in a four minute video of the star undressing. It has since been viewed nearly 17 million times. Her stalker allegedly followed her to three different cities, and he had at least 17 other victims. It’s also worth noting that her stalker is responsible for 51% of the damages (which she will likely never receive), while the Nashville Marriott and West End Hotel Partners, the company that owns the hotel, are responsible for the remaining 49%.

It goes without saying that the Marriott should have settled. Andrews is proven to be extremely likable, and watching her tears on the stand is sure to generate serious dollars. On top of that, this is a serious security breach that could have been prevented, and although the awarded judgment seems excessive, it will send a message that could not be achieved any other way. Without her tearful testimony, there’s no face to these crimes, and this might heighten security restrictions at hotels. We are all safer today because of Erin Andrews.