Skip to content
There are two takes on Taylor Swift. One is that she’s a sweet, shrewd ingenue with a sincere heart, and the other is that she’s a calculated mastermind that has carefully choreographed every stage of her career, even the ones that seemed unplanned. She fought Apple on behalf of indie music artists, for example, and she was praised for her brazen letter to the behemoth. 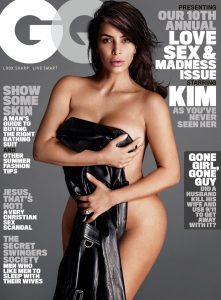 Apple “folded,” and she signed an exclusive deal with the company shortly thereafter. But the timing was a little too close for comfort, and music industry insiders whispered that perhaps the entire event was staged, because these contracts usually take far more time than a few days. As for her Calvin Harris breakup, just when I thought his team might have trumped young Taylor with carefully placed leaks about how the DJ got “bored” with the star and she was some weepy woman begging for a ring, Swift was spotted kissing Tom Hiddleston on a public beach. It goes without saying that she won, and it also goes without saying that if you go up against the Swift machine, you don’t stand a chance. Harris learned that the hard way. But what happens when your war is with Kim Kardashian, whose ass can “break the internet,” and whose image is far different from Swift’s? It’s as if a Kangaroo and an eagle are fighting. It just feels . . . odd.

When Kanye West took a swipe at Swift in a lyric for his new album, ‘The Life of Pablo,’ claiming to have “made that b-ch famous,” Swift hit back during her Grammy speech. Kim wasn’t pleased, and both her and Kanye have long held that he requested permission for the line, and it was granted. See below:

Kim says Taylor’s deep emotional wound is nonsense — okay, she says it’s a lie — and that there’s video proof, because a videographer was actually filming their phone call. Why? Because Kim’s husband commissions videographers to film everything when he’s recording an album, for posterity (and possibly, one day, a documentary). And this is where it gets sticky.

“She totally approved that,” Kim says, shaking her head in annoyance. “She totally knew that that was coming out. She wanted to all of a sudden act like she didn’t. I swear, my husband gets so much shit for things [when] he really was doing proper protocol and even called to get it approved.”

… Swift, Kim insists, “totally gave the okay. Rick Rubin was there. So many respected people in the music business heard that [conversation] and knew. I mean, he’s called me a bitch in his songs. That’s just, like, what they say. I never once think,[gasping] ‘What a derogatory word! How dare he?’ Not in a million years. I don’t know why she just, you know, flipped all of a sudden.… It was funny because [on the call with Kanye, Taylor] said, ‘When I get on the Grammy red carpet, all the media is going to think that I’m so against this, and I’ll just laugh and say, ‘The joke’s on you, guys. I was in on it the whole time.’ And I’m like, wait, but [in] your Grammy speech, you completely dissed my husband just to play the victim again.”

“Taylor does not hold anything against Kim Kardashian as she recognizes the pressure Kim must be under and that she is only repeating what she has been told by Kanye West. However, that does not change the fact that much of what Kim is saying is incorrect. Kanye West and Taylor only spoke once on the phone while she was on vacation with her family in January of 2016 and they have never spoken since. Taylor has never denied that conversation took place. It was on that phone call that Kanye West also asked her to release the song on her Twitter account, which she declined to do. Kanye West never told Taylor he was going to use the term ‘that bitch’ in referencing her. A song cannot be approved if it was never heard. Kanye West never played the song for Taylor Swift. Taylor heard it for the first time when everyone else did and was humiliated. Kim Kardashian’s claim that Taylor and her team were aware of being recorded is not true, and Taylor cannot understand why Kanye West, and now Kim Kardashian, will not just leave her alone.”

So who’s telling the truth? That’s up for you to decide, but perhaps it lies somewhere in the middle. My guess? Taylor knew more than she let on, but perhaps not the entirety of the song. That being said, she’s humorless, and the line in question is pretty tame. I also take issue with the implication that Kim Kardashian is under her husband’s spell and therefore forced to take his side. It’s anti-woman, and I expect more from Team Swift.